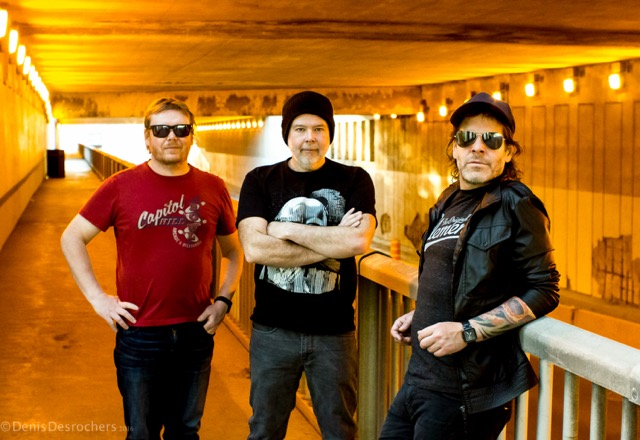 Patiently Awaiting the Meteorite’s debut single and video is for the grooving, 70s layered masterpiece “Electrified,” from their forthcoming first full albums, Canyon Diablo. The group comprised of an ongoing sonic collaboration of Dee and The Grand Brothers. Combining organic, powerful bass lines, thumping drums, walls of keyboards and surging melodic vocals melded to folky chanting, there’s a constant immediacy to the music on offer here but the more you play the song, the more carefully placed textures and unusual sonic elements radiate from the mix. Influences of classic psychedelic rock, modern upbeat folk, new wave and even a disco like shuffle permeate the many variations heard in this tune.

Dee has been carving a reputation for himself with notable musical highlights such as his song “Miles and Miles (Living on the Edge)” being chosen for a Ford commercial that ran during the Super Bowl and another wonderful track “Filter Factory” receiving more than 1.6 million views on YouTube. His influence has stretched both nationally and internationally at this point. The Grand Brothers are no strangers to the music scene either, previously collaborating with Dee on his second solo record Day by Day. The Grand Brothers has produced numerous international artists including Pascale Picard’s “Me, Myself and Us” which received a Juno award nomination as the album itself became an international hit. On “Electrified,” both Dee and The Grand Brothers showcase just how intensely connected their aural blending really is. This song is all about the groove coming into focus as the Grand Brothers stitch all of the colliding musical components together with seamless precision and accuracy.

“Electrified” is a song that you can play over and over again while constantly discovering brand new ideas during each and every listen. The sheer number of different keyboard textures smattered over the music’s sharp, moving rhythms and careening vocals (which urge the listener to “Keep on rollin’,” “Keep on movin’”) that convey the message of an artist needing to sing his or her song. There’s constant forward motion to the music that refuses to let up. In terms of sound quality this is a top-tier production that’s as lush and vibrant as anything out there in the mainstream eye currently. One could compare the music possibly to Bon Iver, Mumford and Sons or Of Monsters and Men, but this stuff is a lot punchier and grittier than most of the modern folk-oriented groups (sans the shifting musical imagery of Bon Iver).

Anyone that enjoys music that makes you want to get up, go outside and be alive will surely love what’s happening on “Electrified.” PATM’s statement arrive loud n’ clear to a world that really needs it. If a lot of today’s music seems to get further and further away from what the 70’s taught us, PATM hopes to fix the bridge over the gap.