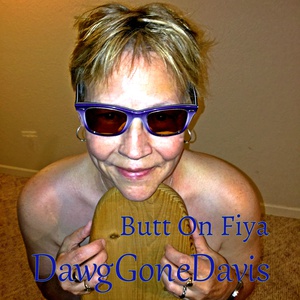 No matter what your persuasion, most people can agree that comedy has the power to make the world a better place. Whether you’re as good looking as a supermodel or as plain as a piece of paper, if you’re a funny person, you’re going to make it in this world. There’s a lot of really disgusting, sick and evil things that people do in America and all over the planet for absolutely no reason whatsoever. It’s hard just to get through the week anymore without hearing a somber story of loss or rage-inducing news of injustice. Comedy disrupts all of that chaos and mayhem and makes us forget about the pains of life for a moment.

In her new single, “Butt on Fiya,” out now from Wolf Digital records, Basehor, Kansas-based rapper Dawg Gone Davis takes comedic rap to the next level of bizarre chic with reflective rhymes that harmonize with a classic beat that would make even Eazy-E proud. A writer since the age of six, Dawg Gone Davis (or Rebecca Rogers Davis as she occasionally goes by) is no stranger to the creative industry. Educated in journalism at the University of Kansas and having received her MBA from Baker University, Davis already has three published books under her belt in addition to her two single released this year. All of her material is joyously funny and often intimately autobiographical, with 100% of all the proceeds and profits from her work going to Kansas City’s Operation Breakthrough. Of her service, the non-profit charity says; “Springfield, Mo spawned a serious and very silly girl, named Rebecca (Rogers) Davis. The ability to write and perform original material to raise money for Operation Breakthrough in Kansas City, MO, came out of nowhere, literally. The full-time IT Project Manager goes all-out after office hours to support the Operation Breakthrough kids.”

What’s even more awesome, is that in these modern times of the “Look at me!” generation that cannot live without their Instagram and Twitter pages, Dawg Gone Davis isn’t pretentiously bragging about her giving back to the community or trying to sell you a self-righteous agenda. She’s just rapping, laughing and loving every minute of her life. With this kind of exuberant positive energy motivating her, it should come with no surprise to anyone that this multitalented woman not only beat a vicious cancer diagnosis almost half a decade ago but now is rapping that “Hey babies, don’t get carried away. Cancer took my boobs, now my tree don’t sway. I’m the cancer’s ironing board, and I cannot lie.” And hey, if that isn’t the definition of an Original Gangsta these days, then I honestly don’t know what is anymore.

Listen for “Butt on Fiya” to make its way onto specialty radio dials everywhere soon, and link up with Dawg Gone Davis online at her official Facebook page, facebook.com/rebecca.l.davis.948. To learn more about how you can help Operation Breakthrough continue to serve the children who need it most, visit their website as well at operationbreakthrough.org.