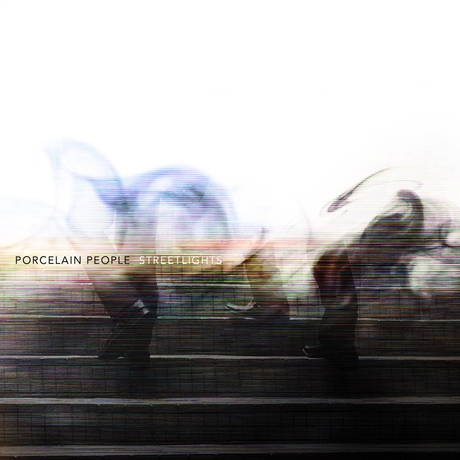 The unification of electronica with pop music grew, in part, from the gradual gravitation of synth fueled eighties pop with the burgeoning dance music scene of the same era. At its purest, there’s very little rock heard in this style, if any. Porcelain People are no different in this regard. Their first full length album Streetlights is a totally realized musical effort that achieves a flawless balance between the competing melodic and style elements. The pop side of Porcelain People’s music reigns a little more strongly thanks to their extensively developed melodies, but the synthesizer work has substantive melodic value as well and often helps lay down convincingly natural percussion parts. The thirteen song collection has solid production from first note to last and never treats a single individual component in their presentation as paramount. Instead, the music is offered up with a decidedly long view and tremendous imagination.

The album’s kick off, “Streetlights”, is as fine of a title song as the duo could have hoped for. It has a rousing build up that sweeps listeners up immediately and sets them spinning in a controlled melodic whirlwind. “Vital” has an almost anthemic blast of energy, but it never goes completely over the top in that direction and begins pandering to its audience. The chorus hook is, arguably, one of the album’s strongest. Porcelain People show off their diversity with the clanging, remarkably organic sounding synth percussion pushing the track “Start It Over”. Some of the duo’s strongest melodies hang off this clanging backbeat and its tightly condensed pattern gives the song unusual movement. They show another face to listeners with the enigmatic and atmospheric “Harlequin”. It never stretches the limits of the accessibility heard on other tracks while still somehow bringing a much more artsy edge to the material than heard on the earlier tracks. One of the album’s more infectious numbers, “Play in My Paradise”, brings a bright pop sheen to what is otherwise a solidly reggae backing track.

The surprising addition of an instrumental works quite well despite the unexpected quality of its inclusion. “Kingdom” is deceptively modest track with a relatively brief running time that, nonetheless, spins itself in a number of low key, yet inventive, ways. “Feeling Like Falling” has some great guitar filling the gaps in the mix and nicely augmenting the synthesizer. The steady drum machine beat, once again, has a surprising live quality and sets a gently striding tone that imperceptibly mounts to an inevitable and satisfying conclusion. “Can’t Fall Now” is largely dominated by the electronica and other elements like guitar and percussion play a much more diminished role. The album’s last offering, “Lullaby”, is a sensitively rendered final curtain for Streetlights that elicits one of Josh Thornhill’s best vocals on the release.

Streetlights has creativity and energy to burn in equal measure. Moreover, this is an album that never loses it way, despite taking a number of detours, and reroutes itself with a facility that even veteran acts and bands would envy. Porcelain People have landed in a big way.