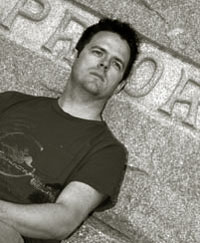 Having been a musician from a very early age, Randon Purcell is pursuing his dream job to be a musician while at the same time working his nine-to-five as a software engineer and supporting his family. What a go-getter! Randon Purcell writes some clean, honest rock music that leaves your ears polished, shiny, and waiting for more. It’s a soothing sound, but it also catches your attention. It’s not music that you will easily forget, so try giving it a listen!

Close to releasing his first album, “Revelations,” Randon Purcell has worked hard to get his music where it is today. His songs have a great mix of instruments including guitar, drums, and piano. Nothing bugs me more than when artist take credit for their producer’s music. Randon, being a new member to the music industry, hasn’t had that issue so far. He is creatively unrestricted, which means that Randon writes all his own music and lyrics. With this guy, you know the music that you’re getting is straight from the source.

“Hope” is, as the title might give away (sorry, SPOILER ALERT!), an extremely hopeful song about a man in the face of a great, changing world. The song “Atlas” is a great tune. It opens with a powerful, and melodious guitar picking arrangement. Then Randon’s voice comes in over it and they mesh together perfectly. The melodious picking draws you further into the song and then the drums kick in, adding an even deeper, almost spiritual element to the song. Two other songs that might pique your interest are “Volition” and “Revelator.”

If you are interested in learning more about Randon Purcell and also hearing some of his moving tunes, then visit his website here: https://randonpurcell.com/about.html