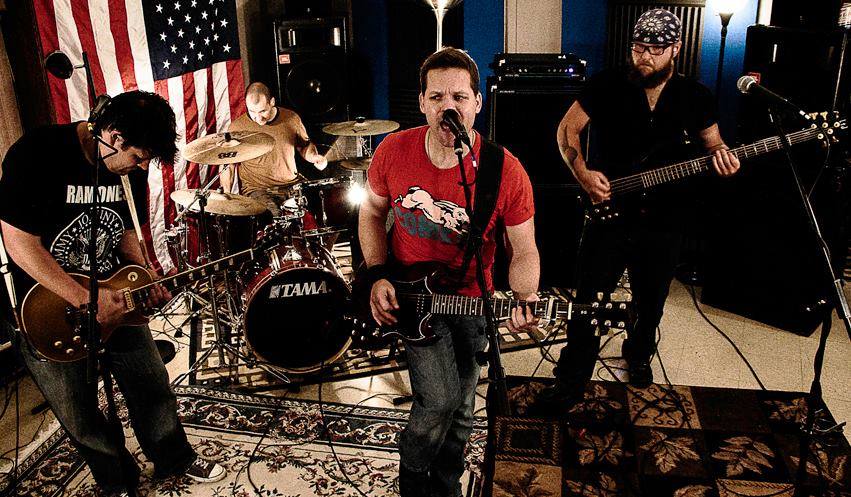 The first release from Milwaukee, Wisconsin’s RedBelt is a reminder that rock music may be moribund in terms of commercial visibility, unfortunately overtaken by pop and hip hop as the music of choice for many young music fans and concert goers, but that its artistic life remains as vital as ever. The immediacy provided by the four piece band setup has been recognized since the nineteen forties and fifties when classic country and blues artists first banded together in such configurations. Much of RedBelt’s power on their debut album Beautiful Surround comes from the combustible chemistry that they manifest between its four members. They, perhaps, overreach some by including thirteen songs on Beautiful Surround, but listeners should probably regard that as evidence of the level of inspiration they felt during the writing and recording process for this debut.

“American Mercy” is listener’s first signal that they are in very good hands. This is some sharp songwriting that betrays some punk music influences, but they are made sleeker and sharper by the introduction of melodic aspects and straight ahead rock influences. Lead guitarist Mike Mann and rhythm guitarist Kevin Brown make an excellent team on guitar, but Brown pulls great double duty with his equally compelling lead vocals. “Got It Made (I Know, You Know)” is a surprising shot in the classic rock direction. The surprising aspect to the song, however, isn’t the fact that they would attempt it; it’s the fact that the classic rock sound gives it its bite while still seamlessly incorporating the band’s other influences and not missing a beat. Another great quality of the musical performances on Beautiful Surround is the rhythm section work from drummer Jeff Holden and bassist Ricky Ganiere. They alternate between being a busy duo as players, hanging back and concentrating solely on maintaining a steady bottom end, but everything they do makes sense and serves the songs quite well.

The unexpected presence of slide guitar in “Shoot It All The Time”, accompanied by acoustic guitar presumably played by rhythm guitarist Kevin Brown, underscores the band’s classic rock influences in a very stylish way. It isn’t a purely ornamental addition. The more laid back feeling they go for here reappears on the album’s title track. “Beautiful Surround” owes much more to alternative rock leanings than its classic rock cousin, but it’s also one of RedBelt’s finest songwriting creations on the release and easily reaches the same heights of excellence set by the earlier “American Mercy”. “Cold” is a rough and tumble guitar track, but it’s also the most melodically powerful and breezy song on the release. Kevin Brown delivers a vocal with tremendous gusto, but never tries to hog the spotlight and receives ample support from the backing vocals of Mann and bassist Ganiere. RedBelt works up quite a lather on the album’s best uptempo rocker “Throw Away” and longtime fans of both rock and punk music won’t fail to be impressed by the variety of elements they bring together on this gem.

This is how you do this style of music right. You don’t hem yourself in pursuing one style to the exclusion of all others but, instead, work hard to subsume a melting pot of influences into a whole greater than the sum of its individual parts. RedBelt’s Beautiful Surround is a winner with few lulls.