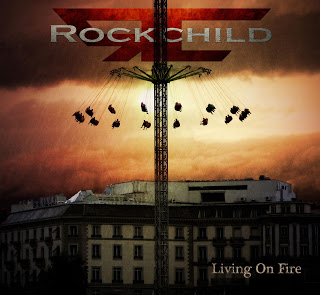 Hailing from the bustling, sunny streets of Los Angeles is rock and roll’s next up and coming heavyweight act, challenging the entire scene with their energized melodies and powerful guitar-driven songs. Poised to become Southern California’s next staple act, Rockchild is taking the local market by storm with their debut full-length LP, Living on Fire. Featuring the single “Against a Man” along with 10 other tracks of in-your-face, melodic rock, this five-piece phenomenon is ready to hit the road and take on the U.S. from coast to coast.

Committed to transcending the run of the mill radio rock that pollutes the airwaves, Rockchild plays an inspired brand of music, utilizing a wide variety of influences to craft a blend of aggressive, yet melodic sounds. Led by Matthew Roseman on vocals, and guitarists Nathan Galli and Stu Gotz, the new, yet seasoned group quickly started hitting venues throughout Southern California in support of their demo EP. Taking cues from mega-acts such as A Perfect Circle, Led Zeppelin, Killswitch Engage and Foo Fighters, each member lends their experience and talent to create a collaborative effort which is truly their own.

Following an overwhelming response to their demo and a series of performances throughout Los Angeles and San Diego, Rockchild hit the recording studio releasing Living on Fire in April 2012. Recorded, produced and mixed by Juan Carlos Suarez at Stone Heavy Sound in California and mastered by Ted Jensen of Sterling Sound in NYC, the 11-track debut captures the band’s hybrid rock style and thought-provoking lyrics in crystal clear, impressive quality. From the crushing opening moments of “Winded” to the chilling melodies and chorus of “Reaching,” each track exhibits Rockchild flexing their creative muscles and displays their versatile songwriting skills in all their glory.

Available now through digital retailers such as iTunes, Living on Fire is just the beginning for Los Angeles’ latest challenger to the indie rock throne. Visit their official website to get a taste of the LP with 3 free streaming tracks, and keep up with tour dates on Facebook or Twitter.