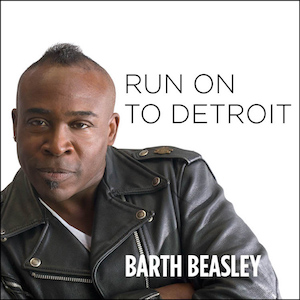 While many reviewers are hesitant to put pen to paper in writing a review about just a single every now and then one comes along that makes you want to share it with the world. “Run On To Detroit” by Barth Beasley is one such single and here’s what I believe makes it worthy: It’ll rock you from beginning to end.

Singer and keyboardist Barth Beasley is in the same league as recording legends such as Billy Preston, Little Richard and Elton John. He sings from his soul and tickles the ivories like a playful lover teasing the object of his affection. To top it off on this single he’s evidently mastered the craft of writing tight tunes while telling a memorable tale and all in under four minutes. That’s not as easy as you may think.

It’s a haunting tale that tells of a barbershop friend who, like everyone one of us, has some secrets that we hide. It’s told in a most cinematic style with the past and the present slowly dissolving and fading into one another as it unfolds. At times the two even bump and collide in unexpected ways. The result can be surprisingly painful.

Perhaps it’s because Beasley’s background includes not only music but film. Years ago he was cast in the 1996 Tom Hanks film “That Thing You Do” (which was not only a starring vehicle for Hanks but was also his directorial debut) where Beasley played a band member of one of the musical combos depicted. Maybe not much of a stretch for and musician to portray a musician, but nonetheless it appears to have made a weighty impression on his songwriting talents.

For “Run On To Detroit” this artist was fortunate enough to have Michael Jackson drummer Tiki Pasillas as part of the rhythm section on the record. Add that to having

Grammy nominated and Emmy Award winning producer Allan Phillips in the control room and you have an unstoppable mix of record making studio magic. Want the proof? Then take a listen: www.reverbnation.com/rpk/barthbeasley