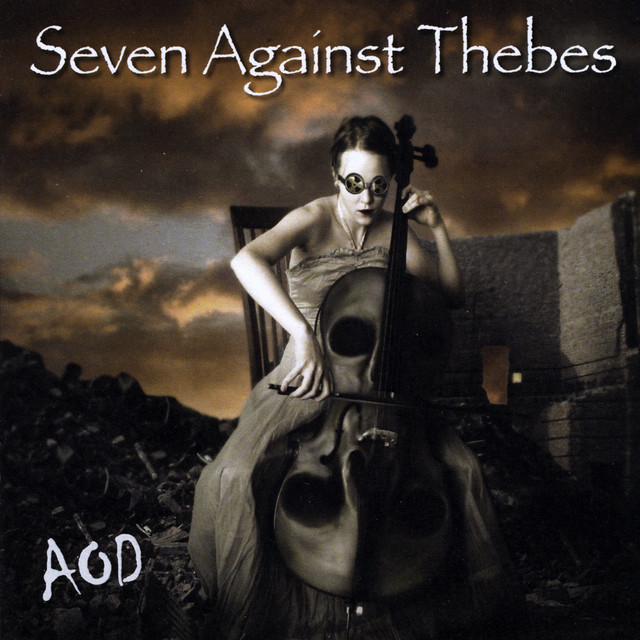 Growling bass tones channel a sound that is reminiscent of a wild beast awakening from a long slumber at the onset of “Serpens Caput,” the opening track in Seven Against Thebes’ self-titled LP. A sitar introduces an eastern flavor to the ominous sonic undertow taking shape around us, but its cerebral tone is anything but a predictable nod to 60’s psychedelic rock. The beat starts to form, and as it grows in size, so does the chill-factor. The gritty fuzz of a flange-laden, distorted guitar slices through the stoic backdrop, and suddenly, without warning, it emits a full-color riff that is thick, scooped, and undeniably threatening. This menacing melody sets the mood for what will soon follow in the tracklist, but the sonic brutality has only just begun.

A powerhouse scream segues us from “Serpens Caput” into the punkish “7.A.T.,” which sports a grinding, hardcore-inspired structure that is a far cry from the sludge of the preceding instrumental intro. The vocal track spits out the lyrics with a ferocious angst against a bludgeoning drumbeat before that gargantuan guitar we first met in “Serpens Caput” makes a blistering reprisal with a violent riff to match this song’s rip-roar rhythm. We’re churning back and forth between metal and punk territory with nauseating adrenaline by the time we make it into the swaggering percussive strut of “Equilibrium,” but the progressive design of the music allows for us to transition from one track to the next rather seamlessly.

The drum pattern that gets “Equilibrium” off and running has a lot of understated rebelliousness, and once its gallop gives way to the Nebula-esque lead guitar, this hurricane of overdrive starts to feel a little more controlled than it did at the start of Seven Against Thebes. The consistency in the mix continues into the chugging “Nemesis,” which imparts the most cathartic chorus of the entire album (in my opinion, at least) whilst steering clear of campy stadium rock excesses. This is a really well-put together LP that tends to put its sizzling riffage in the center of the spotlight, and aside from a couple of bloated moments where the band gets a little too complex in their jamming, everything here is pretty concise and to the point.

“Mask” utilizes a captivating reverse echo effect to get us engaged right from the jump, but don’t let its stony opening salvo fool you; there’s a D-beat-style death march capable of crushing anything and everything that comes in Seven Against Thebes’ path waiting for us just around the corner. The indulgent guitar discord takes a backseat to the anthemic vocals in this song, which present a really bold climax at the conclusion of the track and the start of the acoustic “7th Sign.” I found this latter piece to be a bit of an unnecessary addition to the record, but it’s nevertheless steeped in substance and textured harmonies that are a step away from the tone we hear in the other songs on the album.

Neon-colored feedback leads us into a whirlpool of weighty blows that the aptly-titled “Prey for Me” contains, and though I initially found this track to be the most muscular of any on Seven Against Thebes, it wasn’t until I found myself in the clutches of the groove-metal bruiser “Feed the Furnace” that I realized just how heavy this band can get when they’re firing on all cylinders. Each of the players gets to air-out their individual skillsets without having to limit the virtuosity of their performances here, and if it’s a fair sampling of what they would be able to dish out in a live setting, I can imagine theirs being a really exciting show to see in virtually any venue.

Conceptually speaking, “Swandiver” is a multilayered delight with a slight pop bend to the hook in its classic rock chorus, and while it’s got a different construction than the other songs in this LP’s second act have, it doesn’t stand out as the black sheep of the flock at all. “Ophiuchus” is one of those few aforementioned instances of unneeded thrills and chills, but it serves as a digestible bridge into the gripping “Suicide Note” just the same. Seven Against Thebes comes to a conclusion with the mild twister “Serpens Cauda” and effectively comes full-circle from where it first began, but I think that it takes several dedicated listens to fully appreciate all of the multifaceted splendor that its dozen tracks – this one included – have to share.

Listeners in search of a haunting rock sound this summer would be wise to give Seven Against Thebes’ 2011 debut a spin, as it boasts a plethora of both uncompromisingly heavy riffs and thought-provoking lyrical enigmas that aren’t enveloped in the plasticity of a commercialized mainstream music culture. It’s a hearty set of songs for sure, and definitely a worthwhile acquisition for fans of alternative metal and hard rock alike.