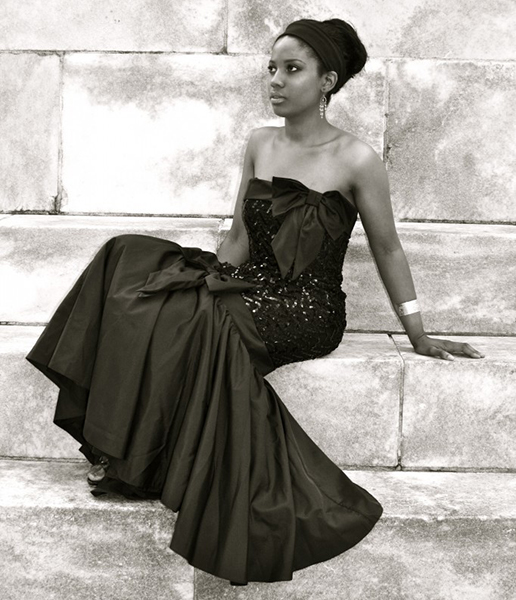 I am quite taken with Integriti Reeves’ performance of the Gilberto Gil Latin jazz classic “Eu Vim Da Bahia”. The song is one of Gil’s most popular numbers and the Brazilian born composer and performer would/will undoubtedly be rather happy to hear how his creation continues to live and reach new listeners in the hands of such a prodigious young vocalist. Her debut EP Stairway to the Stars features the single and you can hear why she chose the song as a representative number from her first release. It has a smooth tone throughout the whole track yet communicates a wealth of emotion that never threatens to overtake the song or listeners alike. It’s the product of a musical education for Reeves that includes numerous academics achievements alongside impressive runs with a variety of five star artists like Stevie Wonder, Patrice Rushen, Hugh Masekela, and Smokey Robinson.

The performance reflects those influences throughout its three minutes and change running time. The genre might be Latin jazz, but there’s no question to my ears that Reeves has the heart of a soul singer beating hard within her chest and she invests a great deal of smoky emotion into her vocal delivery. I’m enchanted to hear how her voice and the guitar play off one another – there’s never any figurative stepping on toes and these two parts of the song, in particular, are geared to serve one another rather than stand out on their own.

The guitar takes on a support role with the introduction of violin into the performance. The instrument enjoys a brief run, it is not constant throughout the track, but it seemed to me the crowning touch for the song and I felt bewitched by its melodic elegance. Elegance is a value rife throughout this performance, but never at the expense of emotion. The aforementioned soulfulness of Reeves’ voice keeps the suggestion of deeper feelings forever near the forefront of the listener’s experience and, for me, is one of the chief differences between her take on the song and Gilberto Gil’s original.

Some listeners might be intimidated by the vocal being in another language than English. This will not matter if you give the song a chance. Adding to what I’ve already said about her singing talents, Reeves gets so “inside” the song that her vocal imparts a clear sense of the song’s mood and “meaning” without needing to understand even a single word. This is no small feat. She takes whatever barriers this quality presents and reduces them to rubble.

“Eu Vim Da Bahia” deserves the widest possible hearing. Integriti Reeves has assembled the total package for this Stairway to the Stars single and every second of the song demonstrates how far along this young singer is – she is a self-assured interpreter who has the needed skills to put her own spin on other’s material. This is, once again, no small thing. In a world of carbon copy singers who vocalize each new line the same as the last, she stands out and makes you eager to hear more.