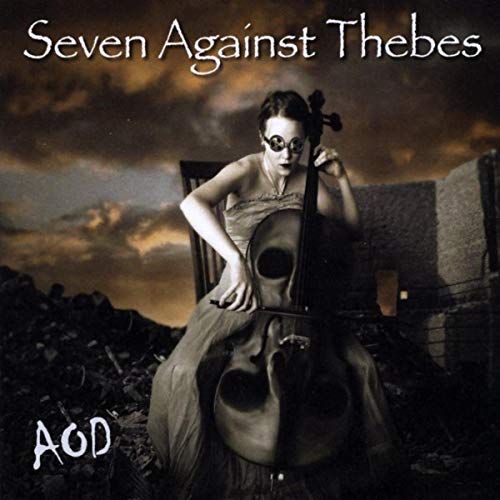 Seven Against Thebes came together in 2007 and first appeared on rock fans’ radar with their 2011 self titled debut.  Their second full length release Art of Deception features twelve songs recalling their debut in some respects, but the songwriting and musical attributes of this new release extend the band’s potential rather than shackling them to past glories. This is far from a collection brimming over with optimism and love for the human race, but it likewise never allows the songs to become mired in melodramatic despair. It, instead, feels and sounds ripped from the pages of autobiography.

The band has an obvious penchant for opening their releases with instrumental and the first track “MMXXII” continues this tradition. Guitarist Cyrus Rhodes’ embraces dueling sounds for this performance, phasing and echo alike, and the texture has a cutting quality that draws blood from listeners. “’Til Death Do Us Part” chronicles a failed marriage without ever dragging listeners down – it simmers with clinched fist defiance and vocalist Rusty Hoyle embodies its attitude with both raw indignation and bracing blasts of emotion. Hoyle’s talents are varied, but the bucket of blood passion he brings to each song distinguishes him from countless rock singers. Greta Van Fleet be damned. He has lost nothing since the band’s debut and, if anything, has learned to incorporate more finesse into his performances without sacrificing an ounce of passion and power. Rhodes’ grinding riffing embeds the track deep into your skull.

The hard charging “Killing Time” brawls it way out of your speakers and drummer Bruce Burgess ratchets up its dramatic temperature with powerhouse percussion. Production is always key to bringing off a memorable rock album and this song, among others, emphasizes the obvious care taken with nailing the album’s sound. An assortment of tempo changes strewn throughout the song hit at the right time and adds variety to the track. “Mastervision” turns heads with Dave Black’s rugged and distorted bass sound; the instrument is much more present with this release than earlier outings from the band. Black soon transforms the opening into an ominous and economical groove balancing musicality and atmosphere with impressive skill while Hoyle delivers an excellent vocal he underplays in an artful way.

Dave Black leads listeners into ‘Ashes 2 Ashes”, the album’s longest track, and Seven Against Thebes will surprise longtime listeners with the song’s ambient touches. The arrangement has a deceptive spartan simplicity and sustains that minimalist approach until the end; rather than rolling over listeners with white-knuckled and bloodshot eyed rock, Seven Against Thebes show their hand as a band with an increasing interest in surprising their listeners.  It is the album’s best lyric, as well, drenched in darkness. “Flypaper” is even more daring and benefits from the aforementioned production quality – there are surprising sonic threads weaving around the guitar and Hoyle’s effects-laden vocal has ample bite complimenting another stellar Rhodes performance on guitar.

“Art of Deception” finds the band returning to their roots, so to speak, and stakes its fortunes to uptempo riffing drawing from a bottomless well of energy. One of Rhodes’ greatest strengths comes from his talent for spiking even the most recognizable tropes with an added flourish taking them in a different direction and transforms his style without fail for a restrained chorus.  “Yama” is the album’s closer and another extended track, but it is an ideal finale and includes yet another surprise as the band uses electronic instrumentation – something you will not find on their debut. They incorporate this new sound into their sonic DNA without losing any of their identity. Much of the band’s musical character from earlier releases remains intact, but it is obvious Seven Against Thebes has grown a great deal since their 2011 debut and it is unsurprising to wonder what a third studio release will bring.