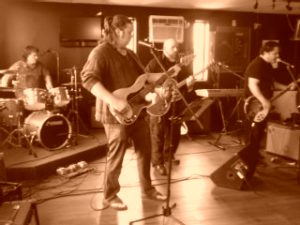 This is an album that’s all about punk rock fire. The passion and fury run deep here. This is no frills, under-produced magic. It’s the kind of thing that’s designed to get the blood pumping. It works very well in that regard.

The opening song bears the title “Don’t Let It Rain.” I keep wanting this to just kick in and drive hard and fast. It’s a slowly building tune that’s hard rocking and solid. It just seems to miss that push over the edge. Now, “How’d I Ever Live” is more like it. It has that drive and energy that was missing from the last cut.

The energy gets ramped up even more on “I Got a Feeling.” This has less of that raw edge in some ways. It comes in closer to something like The Ramones.   Fast paced, high energy punk rock is the idea behind “Before Time Began.” It is another strong tune.

The more melodic guitar soloing in the middle of “Fly Away” is stunning. It’s an extended solo, too. Beyond that, this isn’t very different from the rest of the album. That section, though, really elevates this. Yes, I intended the pun.

There is some really blues driven sound on the guitar solo on “Burning Wheels.” It is a powerhouse tune that’s one of my favorites on the disc. I like the sneer that can be heard on the vocals on “Take Me Down.” The song has more old rock and roll vibes and works pretty well.

My only real complaint about this album is that I wish there was more music. I like what I’ve heard, and it really appeals to my punk rock spirit. It just leaves me wanting more. I guess that’s a good thing, though.