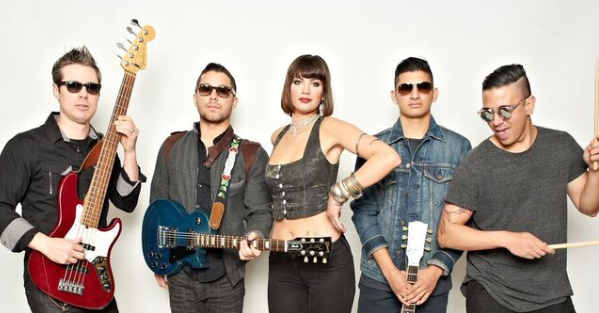 The new single from the artful, hard rockin’ five piece Dynamos “Shake, Rattle, and Roll” poises them to make a big splash as one of the best young rock acts rising through the ranks. Their debut EP Cold Comfort served notice of an important new voice in a style and genre often decried as either dying or dead and this single makes clear the band is ready to pick up where they left off and then some. Each of the band’s five individual components play with powerful chemistry and conviction while Elliot Lawrence’s production brings the instruments close to listeners and highlights Nadia Elmistikawy’s fiery vocals. “Shake, Rattle, and Roll” does a lot of all three of the words in its title and Dynamos come across as a band set to take the rock world by storm. They live up to their hype, stylish presentation, and all that much more.

It’s apparent even in the opening. They begin “Shake, Rattle, and Roll” with the sort of patient buildup that makes for some great rock songs and is all the more impressive considering the song’s relatively brief running time. Nick Schaadt’s bass and Ian Nakawaza’s drums are responsible for much of the song’s initial buildup, but guitarists Jacob Mayeda and Carlos Barrea are equally important with the way they neatly punctuate the rhythm section’s work for invigorating effect. They harness incredible energy within the song’s relatively narrow musical boundaries and the production surrounds it all with a warm, intimate edge . Giving such weight in the mix to the band’s bottom end sound on this release proves to be a key to the song’s success as the track generates a lot of heat from the rhythm section’s work alone.

Nadia Elmistikawy’s singing generates a lot of heat as well. She has a voice that’s equal parts blues and white-knuckled rock ferocity while retaining the good sense to never leave things too overwrought. It’s more than just fire and fury though. She knows when to push hard on the lyrics, bring her voice in sync with the instruments, and when to lighten her touch for effect. She stirs up an added atmosphere of life-affirming desire with some sly nods to the song’s less obvious influences that she plays just right. Yes, there’s a lot of blood and sweat in what she does as a singer, but Elmistikawy is more than some fire-breathing singer and, instead, proves with “Shake, Rattle, and Roll” that she has style to burn. Dynamos have made impressive strides towards gaining notice based on a, so far, slender discography, but earn respect that few new bands ever achieve. They sound ready for prime time and burn with effortless spirit that blows out the borders of modern rock and blazes its own path. The West Coast won’t be able to contain this band for long.