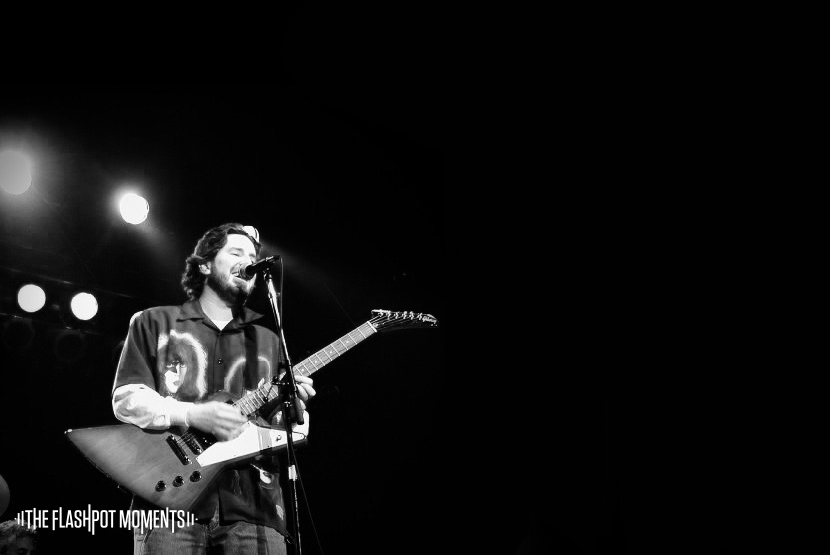 The melodic power and sleek, streamlined straight-ahead charge to The Flashpot Moments’ music is largely the result of Tim Cawley’s songwriting and performing skill. Cawley, however, has the good sense to draft a variety of top flight players to contribute to the eleven songs on this debut and their talents dovetail nicely with what he wants for these songs. There’s an anthemic quality strong over the course of The Flashpot Moments’ eleven tracks, but this self-titled debut never panders too much for the audience’s favor. Cawley, undoubtedly, wants to create a crowd-pleasing work, but there’s a passion bubbling from what he does that suggests he’s in this for himself first and foremost, but happy to share his love for playing music with the world at large. We are lucky. This is an album that, every step of the way, is worthy of your attention and it’s an entertaining ride.

The ride starts off quite splendidly with “Places Unknown”. It’s interesting that an album so centered around the guitar opens itself with such a focus on vocals, but the largely acapella intro sets an important tone. The six string fire fueling a lot of this album is important, but getting the vocals just right is obviously just as important for Cawley in some ways and he hits the mark with this song’s rousing stride and its alternating colors of light and shadow. The bass playing is quite good here and his fellow musicians on this track show a great ability to change tempo without ever losing the song’s thread. The uptempo bounce and winning melody powering “Strangers Dance” makes it even easier to relate to its lyric about how people come together, but there’s an added layer of intelligence working here for more discerning listeners to enjoy. Cawley can embrace unmitigated fun with intelligence as well. The musical duo of “’Splode (The Party Prelude)” and “Abigail, Mispronounced (The Party Aftermath)” are enjoyable larks in a lot of ways, but there’s an undercurrent of maturity behind their writing that’s equally enjoyable. The first of the two tracks is a little less musically engaging than it might have otherwise been but, taken together, it’s clear these songs can be certain crowd pleasers.

“The Learning Curve” is one of the album’s more powerful rockers and the head of steam this song builds up is quite impressive, but the following track “Hands Up!” has an even stronger drive and blends in some impressive musical turns without ever losing its momentum. Cawley’s vocal on the second song is among his best outings on this collection. “Can’t Wait To Find Out” has the same rock and roll heart coming through, but the musical attack is a little more tempered and closer to the melodic virtues dominating most of this album. The lyric, however, is unusually caustic and shows a different side to his songwriting that lingers in the memory. “Stories We’ve Told” is much more in keeping with the album’s main style and throws in some big guitar chords that help underline its radio-friendly vibe. Tim Cawley concludes the album with the seven-minute plus “The Last Stand”, a fantastically entertaining guitar showcase that never muddies itself up with pretense, but instead makes the big climatic statement he is aiming for. This is a great album from beginning to end and one of the, perhaps, surprise gems of the year thanks to how well it pours old wine into new bottles.