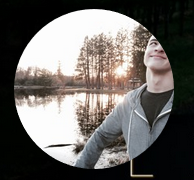 Andrew Gosson has a voice that leaves you breathless. “Give It Time” opens strong and only continues to grow as he finds his footing in the lyrics and the heart of the song. He sounds like he could’ve won “American Idol” in the past handful of years. With “Live and Love” you can hear the depth that Gosson is capable of. His sound is like that of a singer-songwriter, there is no doubting that – but he has this Mumford and Sons element to him that takes you a little further into what he’s doing. He really captures a feel and vibe with every stroke of the guitar. Since pressing play, he’s had this heartfelt style but with “Dreaming On” he sounds sort of sinister at times. Not his voice, but the music he’s constructed makes it seem like he’s a villain in a western here. If you’re Spotify is overflowing with the likes of Mumford and Sons and Chris Stapleton, check out Andrew Gosson’s music today! (https://soundcloud.com/4134)