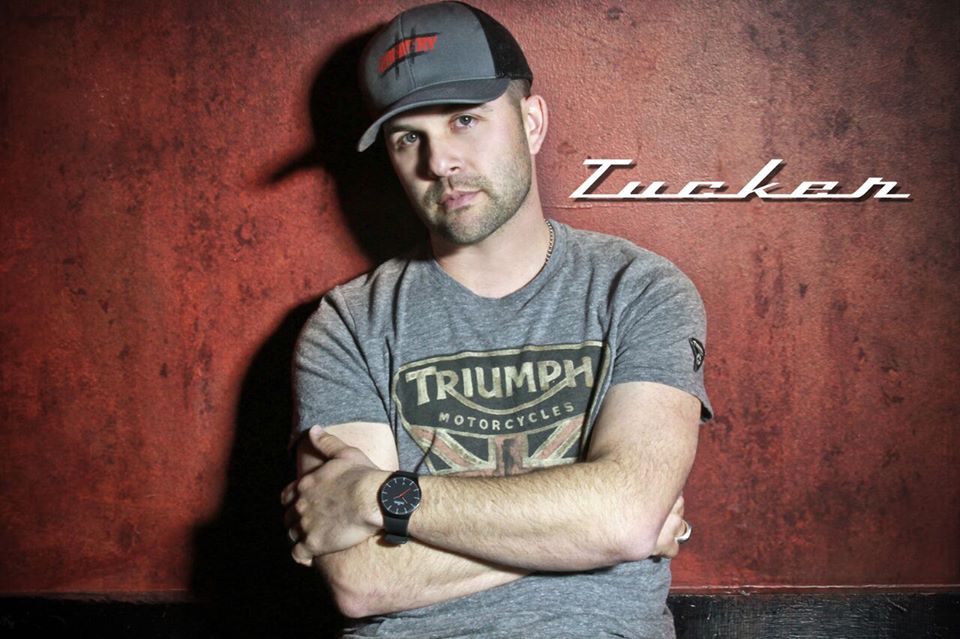 Tucker is a multi-instrumentalist and a prolific songwriter who’s played and toured with Eric Durrance on the Jason Aldean (2008 CMT Tour), Jimmy Wayne, James Otto, Ashley Cleveland, Guy Penrod, Rick Derringer, Michael Peterson and more. When he’s not indulging his love of music, Tucker indulges his passion for cars; American “muscle cars,” street rods and more. “I’m a car freak. It’s something I shared with my dad, and plan to share with my own sons,” Tucker says. He enjoys car shows and just about every car-related reality show on TV.

Tucker is currently restoring a 1968 Chevy Camaro. “What I Can Change” is a sincere message about having a positive impact, about making the little decisions that make a big difference. Making decisions is one thing, carrying them out is another. That is what really comes across once you’re into the single and watch the lyric video for ”What I Can Change,” from the EP entitled #Country which is another excellent track that opens this record by Tucker, a budding musician with a great band. There are no old country values on this EP of seven well-written tracks except to say that crooners are by and large an underrated commodity within any genre of music. Some of the bigger ones of the day do nothing for me, and some deliver in a variety of ways. This Americana boom over the last ten years has produced everything from duds and wannabes to top notch world class players. And Tucker fits right in with the latter of that description. If you like that mix of sub genres to enhance the parent genres, then this single and EP are for you, the well-rounded country music lover who doesn’t mind some pop, rock, and even jazz and folk inflections to spice up the country emphasis but not lose itself in the process. It’s hard to describe sometimes, especially if you aren’t stuck on one type of music, which most self-respecting reviewers cannot be and honestly come across as giving knowledgeable subjective opinions. And you can’t look down that line at this release or you won’t get it. And that can stop any opinion in its tracks, and why Tucker hit a home run with this choice for a single. It speaks from the get go, to the truly flexible country music lover who stays on the cutting edge.

One listen and you’re pretty hooked on what comes off as a bit pop laden at first, but goes onto blast you with an equal balance of the modern and the traditional country flavors that make the genre so accessible. It comes along more than half-way through the EP, so you’re pretty ready for it by then, after some great tunes in their own right, one of particular interest to me is “She’s Like That,” which is an epic country rocker of the original variety. So, the single is surrounded by nothing but greatness, with the exception of a few of them being low on energy, even though the do well at complimenting the faster playing tracks. Make no mistake this is done with integrity and as a single it’s not out of place just because of that. You get the feeling Tucker is a genuinely fun loving soul but doesn’t let that plasticize his overall attitude, which keeps just the right edge focused on the music. I also noticed that there is room for several singles here, and that narrows an EP down to consistency, which isn’t always the case with an EP but there are enough songs here to make that easy because of the standard kept up throughout it. And while it’s quite philosophical it’s still playful in approach to the words and melody. But it’s very important to point out the overall quality on every level here and that can go the exact opposite way with some country fans who are such purists they can’t accept a variety of styles that still stay heavily grounded to the overall category.

Tucker can’t do everything, but he can change, and he keeps that fact on point throughout this heartfelt effort. If this isn’t your cup of tea there is plenty more to enjoy, so don’t let the single detour you from the EP and vice versa. It’s just leading off this release well and deserves a spotlight to get interest, and I believe it does because I have yet to turn it off after several runs through it and the rest of the EP. And if you do reach for this, don’t forget it’s packed with both a pain and pleasurable performance by Tucker and his players. You feel their joys and sorrows, and that is a testament to the band in every note they play. And the video is an added bonus which helped me grab onto what the song is all about. Kudos to Tucker and CO for pulling off a standard with this single, that doesn’t wear off with each listen.