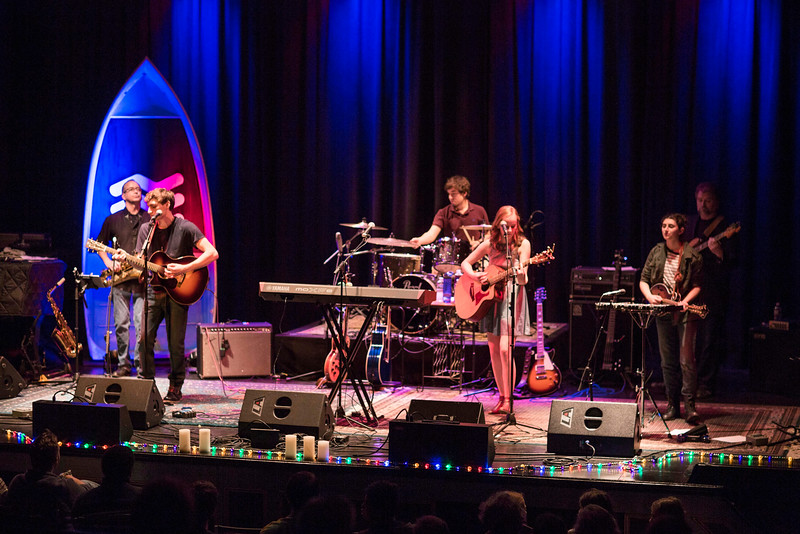 The five piece Water Street, based out of New Jersey, score big with their debut album Waiting for Martin. Unlike most Americana themed bands, Water Street exhibits consistent and widespread diversity throughout the ten tracks compromising their first foray into the full length album genre. They are just as home unleashing solid rockers as they are much more low-key acoustic fare. Much of the reason for this, surely, must be attributable to their instrumental prowess. Virtually every member of the band is a multi-instrumentalist of some sort and this consequently expands their musical vocabulary. Another significant factor fueling their diversity is their two vocalists. Dave Paulson and Claire McNulty both have great voices, but each has such an idiosyncratic tone and point of attack that they are capable of redefining the band’s sound on each successive tune.

They whip up enormous bite on the album’s opener “Better Off Alone”. This is a rock track with a deep groove and a funked up edge courtesy of Paulson’s electric guitar and well-recorded, swinging drums. Water Street keeps things tight and focused throughout Waiting for Martin and the first song is no exception. “Tidal Wave” is a further invocation of their potential for exerting pure rock muscle, but their excursions with this sort of music never come off flat-footed or painfully obvious. “These Eyes” is centered around Paulson’s electric guitar, but there’s a much more staggered stride to the song’s movement. It surrounds the track in a meditative atmosphere thanks to the chiming, infinitely musical deliberateness of Paulson’s guitar attack. “Foul Play” turns away from the guitar-dominant tracks opening the album and shifts the focus to McNulty and her gorgeous piano work. “Foul Play” is, easily, the darkest entry on the album so far, but it isn’t strictly a theatrical enterprise. Instead, this is a rich and lovely piece of living art with a vocal performance from McNulty that’s alone worth the price of the album.

“Something Anything” has a deliciously rollicking feel thanks to a smattering of quasi-barrelhouse piano and a vocal from McNulty delivered with ample technique and gusto. It has a lively step thanks to its major key inclinations and another great swinging performance from the drums. “The Storm” is much more of a traditional folk song than many of the entries on Waiting on Martin, but there’s also a dollop of humor here that’s missing from the earlier songs. It’s also another superb example of how well Paulson and McNulty complement each other vocally “Donna Lee” is another nod to tradition, but like elsewhere on Waiting for Martin, the band imbues the song with vibrant modern energy that doesn’t make it feel reverential at all.

Waiting for Martin works for that reason, above all others. Water Street has the skill to recreate the music of the past, but their songwriting soars and flies on distinctly modern wings. Their lyrical material and the energy they bring to their performance is deeply informed by multiple styles of music and that fact elevates the release far above some hollow recreation of roots music.

One thought on “Water Street – Waiting on Martin”