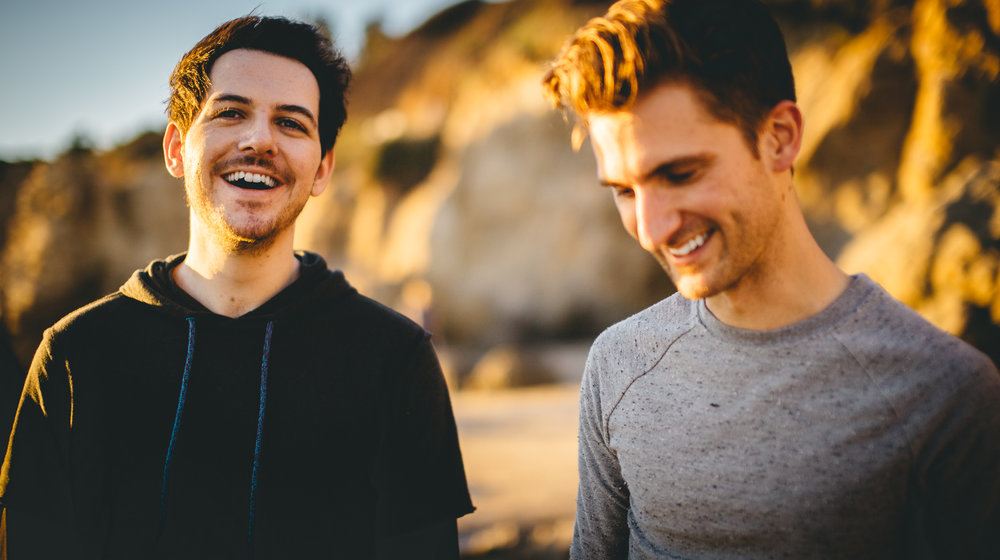 The marriage of Myke Wilken and Ethan Rose’s musical talents has created one of the most idiosyncratic new sounds going today on the indie scene. Their band, We The Dreamers, outpaces efforts in a similar vein from the contemporaries on the basis of their lush compositional qualities alone. While one can often hear faltering confidence, occasional clumsy juxtapositions, and clunky transitions in other outfits and artists attempting to synthesize electronica and indie rock leanings, there are no speed bumps or rough seas for We The Dreamers. Their vision is remarkably complete from the first, but the sheer variety of their musical faces will astound even experienced listeners. They never sound out of place with any of their stylistic shifts; if anything, they exude confidence each time out. We The Dreamers have a powerful musical and lyrical narrative running through their work that will enchant longtime music devotees and casual fans alike.

The light touch of piano and evocative production heard on “Crystal” is an ideal opening for the EP. There’s an ethereal tilt to this music that goes beyond mere pop; rather than mere entertainers, We the Dreamers clearly position themselves as being in the transportation business. This is music designed to inspire and uplift, but it never panders for those effects. Instead, the bedrock qualities of melody and aesthetically beautiful music come together quite nicely here. “Parasol” ups the tempo slightly compared to the opener but still meanders in a quasi-shuffle. It’s a much more instrumentally lush tune than the opener and the interspersion of tasteful percussion gives it a pleasingly amorphous quality that many will enjoy. “A Spark” is much more poetically rendered than many of the other tracks on this EP. It introduces a second voice to the mix, a superb female singer, but she bows out early in favor of another Wilken vocal. This is one of those songs that doesn’t show all of its tricks at once but, instead, evolves and achieves its final effects through a process of accumulation rather than re-iterating the same basic musical movements.

The surehanded skill with dynamics comes into play on the song “Wiser”. They do an exceptional job of modulating the intensity either up or down at key points in the composition and it makes for practically cinematic experience that few duos, solo artists, or bands working in this area share. The songwriting reaches far beyond the usual ken, as well, thanks to how well the duo taps into the pathos of a subject capable of easily lapsing into cliché. “Words” prospers in much of the same fashion. It is a far more stripped back affair than the other six tracks on this debut, but the acoustic guitar accompaniment and vocals should never imply a spartan or bare bones approach lacking in true substance. Myke Wilken’s vocal makes the most of these fine lyrics. The last track on the We Are The Dreamers EP, “Time”, has been earmarked as the duo’s first single and the choice is astute. There’s really no finer fashion of introducing listener’s to the breadth of this band’s vision. “Time” shapes the duo’s indie rock, pop, and electronic influences into a recognizable style for their audience. There’s really nothing quite like this in 2017. We The Dreamers have the individualism and artistry to stand out in a crowded marketplace and we can feel certain that they will be back eventually and better than they even are here.