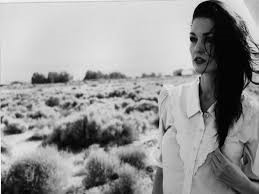 Born in upstate New York and raised in Southern California, Angie Bruyere embodies the old cliché about marching to the beat of your own drummer. After deciding to forego a potentially lucrative modeling career, Angie turned her attentions back to a long deferred first love – music. Her love for bands like The Rolling Stones, Tom Petty and the Heartbreakers, and Fleetwood Mac reached a new level with her introduction to artists like Gram Parsons and it had long since inspired her to start playing guitar and writing songs of her own in that tradition. While her vocal talents are considered, her lyrical talents are just as real, if not as obvious. Bruyere is surrounded by a bevy of top notch players on Blood Like Wine and it’s difficult to not be distracted by the pyrotechnics they conjure. The songs, as a whole, are given the best possible presentation by the production and come leaping out of the speakers with a clear ear for balance and definition.

“Country Radio” kicks the release off with a ripping shot of blues bordering on outright ZZ Top level guitar romp. Angie and the Deserters have a cleaner, sparer approach than many bands of this ilk, but that never means their rave-ups and vamps don’t pack the same punch or tear at the ears with the same sonic bite. Angie certainly sinks her teeth into the lyric and chews the narrative up in her mouth spewing it out as a hard-won reflection on survival and the continued willingness to weather any further bullshit. This is an outlaw’s song and Angie has all of the required swagger. “Smile” requires a different touch altogether and Bruyere doesn’t disappoint. The Deserters create traditional country gold without ever over-indulging themselves with too much slavishness to tradition and Bruyere delivers a vocal that, in some ways, rivals the first song in its enthusiasm. Angie pursues the mood of the lyrics and music in concert with every bit of the same concentration, energy, and focus at work in her initial vocal on Blood Like Wine. She takes a turn towards the theatrical with “The Gift”, but it never runs off the rails or risks pretension. It sports one of Blood Like Wine’s best lyrics and this is thanks, in part, to its unflinching depiction of the theme. It doesn’t rely too deeply on clichés and, instead, places its voice in a primarily personal mode. The backing is quite evocative and doesn’t strain for effect.

“Ain’t Goin’ Down” has a nice, gradual lift that carries it from relatively understated opening minutes into a much more resounding statement of purpose by song’s ending. Angie and the Deserters save their best pieces of arranged music for the end – it is difficult to not acknowledge the obvious structure of song like this and their masterful command of dynamics. The best example of this, however, comes with the final song “Don’t Cry”. This rises up, slowly and with maximum patience, from a demure acoustic opening into a much more involved, yet breathtakingly direct, final curtain. This is a band with surprising diversity despite the fact they always maintain a heavy anchor in traditional American musical forms. Blood Like Wine is yet another building block elevating their stature in a crowded marking place.