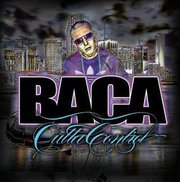 Baca is an unsigned rap and hip-hop artist out of the deserts of Phoenix, AZ. He has an enthusiastic, fun sound filled with hooks, spitfire lyrics, and pretty decent beats. Baca has a sense of how to build a song, and it’s clear from his music that he means business. He is a serious artist with big aspirations, and don’t think for a second he won’t reach them. Baca has arrived with attitude and he’s ready to spread his word to the masses.

Baca uses many different techniques and sounds that are found in plenty of the songs on the Top 40 list. He sure strives to be like the major rap and hip-hop artists out there. Baca’s music uses air-horns, auto-tuning, and heavy beats to set a scene. Within this scene, Baca’s lyrics paint a beautiful tapestry of parties and panties galore. One song that probably best suits Baca’s musical style and overall tone is the song “Light Em Up.” The song has sound techniques and edits that really make you feel like you are in a club.

Other notable songs are “Make Em Go Bang,” “Grind,” and “All the Time J-Swagga,” which opens with a very serious and gratuitous monologue about street life. Baca’s song “All the Time J-Swagga” talks about the difficulties of growing up on the streets of Phoenix. Baca has six solo mixed tapes and has been a part of over ten hip-hop projects. The variety of music from song to song is great to see, and it shows Baca’s range, even as he pushes his way into the music industry.

If you’d like to learn more about Baca and his music, then get visit his website. Get Baca here: https://www.reverbnation.com/yungbaca