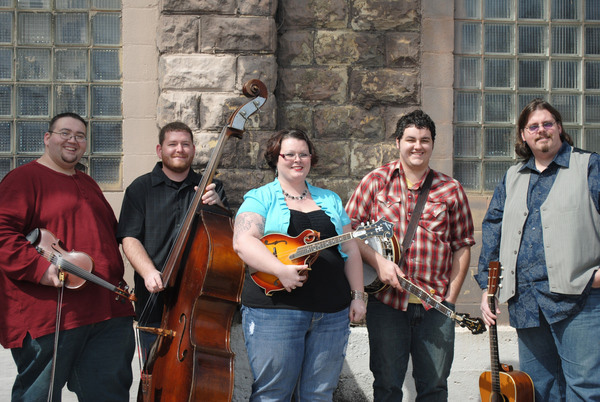 The third studio release from Indiana based bluegrass adherents Blue Mafia, Hanging Tree, marks a new artistic high point for this five piece band. The band is the brainchild of members and married couple Tony and Dara Wray, but they never command the spotlight. Blue Mafia, instead, is a clear band with undeniable chemistry and an easy going sense of mission. The personable manner they approach this traditional music reflects their confidence, but it is clear that they labor mightily to get these songs sounding exactly like they want. The result is a collection that neither holds itself hidebound to merely regurgitate some modern approximation of bluegrass nor veers so far from away from the traditional spirit as to render itself unrecognizable. Hanging Tree will appeal to purists and casual fans alike and has depth found in few modern releases.

It begins with the song “Like a Mining Man” and anyone who thinks material like this has no relevance to modern life should remember a sizable contingent of Trump voters in our last Presidential election are disgruntled former miners lamenting poor health and the loss of jobs. Judged on a purely artistic and musical basis, however, “Like a Mining Man” is a work of intense and incandescent beauty. The banjo and fiddle interplay is particularly effective. The album’s title song has a darker beauty, but the deceptively intricate instrumental work and arrangement rates as one of the most substantive moments on this release. Dara Wray’s vocal is marvelously effective here without ever overreaching for effect. The songs Blue Mafia focus on are those requiring flesh and blood vocal presences and each of the band’s three singing voices are more than capable of enriching the material with their presence. The upbeat tempo of “Sweet Mary of the Mountains” fuels a sweepingly and exquisitely wrought pastoral that recalls rural details to paint a picture without ever belaboring those elements. “The Man You Know”, Dara Wray’s first songwriting contribution to Hanging Tree, has a gossamer thin musical arrangement that never fails to satisfy despite its spartan contents. Instead, the result is intensely suggestive and ably complements Wray’s vocal.

“Baby You’re Gone” has Curtis Bumgarner’s banjo front and center but the fiddle provides a number of important lightning strikes further illuminating the song in brief bursts and extended flurries. Wray works a bluesier sensitivity into her vocal here that’s quite nice. The buouyant musical thrust of “Loneliness and Desperation” belies its title, but the lyrics embody the implied hard scrabble implications. Some of the best bluegrass, for me, has a method of forestalling sorrow it shares with blues music – instead of draping their concerns in dirge like musical settings, the darkest lyrics are often set against bouncy musical backgrounds as if it’s a way to push back against the pain. The album’s finale “Who Are You?” is Hanging Tree’s most commercial piece of music, a bit of acoustic folk with some of the best melody on the release and a relaxed vocal and instrumental performance. The album, perhaps, might benefit from being a couple of songs shorter, but it’s overall quite a work of musical art.