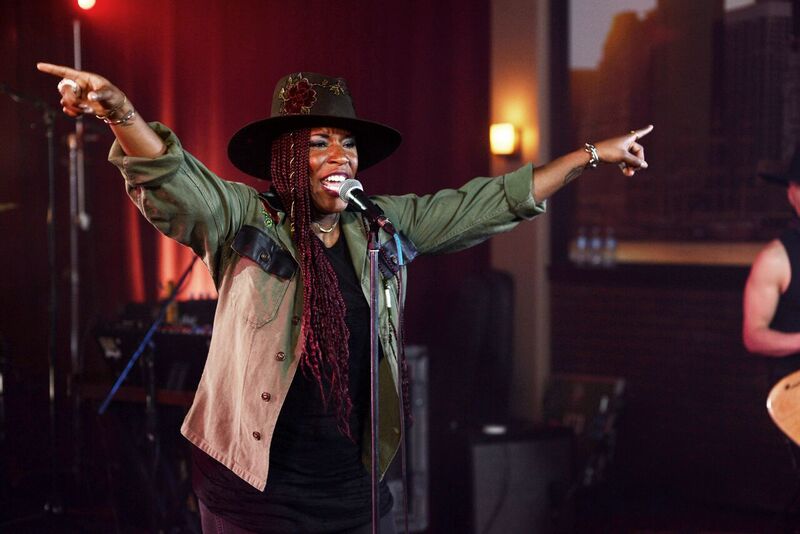 The first single from Nancy Wilson’s new side project Roadcase Royale, “Get Loud”, makes superb use of Liv Warfield’s vocal talents. Warfield, a former member of Prince’s New Power Generation, is respected by countless peers, but deserves to be a household name on the basis of performances like this. Wilson and Warfield are joined by the remaining members of Heart, sans Ann Wilson, and Warfield’s musical collaborator and long time Prince protégé Ryan Waters. Based on song title alone, some listeners might be rather surprised by the track’s comparatively laid back nature. Audiences, however, will find themselves quickly drawn into the relaxed groove of the arrangement and the cool confidence emanating from every quarter. Roadcase Royale provides something fresh and modern with this release – guitar driven music that glows with a lot of contemporary appeal while still invoking the band’s influences in recognizable way.

The inclusion of the Heart band backing up Wilson, Warfield, and Waters brings a decided edge to this that other new bands might lack. Wilson has been playing with this bassist, drummer, and keyboardist for some time and the natural chemistry she shares with them within the confines of the Heart brand extends itself into this project, albeit manifested in a different way. The song runs a little over three minutes in length and, as such, there isn’t a single wasted note in the entire composition. Instrumental breaks are brief and scattered; instead, Wilson, Warfield, and company are clearly intent on crafting a tight, substantive musical presentation. Everything is keyed off the guitars and rhythm section, but it’s the guitars providing the bulk of melody in the arrangement. Waters and Wilson work particularly fine with one another and the moments on this track when they play with an unified, complementary approach ranks among the song’s strongest attributes.

The lyrics definitely sport a social consciousness, but it isn’t social commentary with a cudgel. Instead, this is a plea to make your individual voice heard and assert your right to speak out against what earns your disapproval and scorn. Much like the arrangement, the lyrics Warfield sings don’t have a single word missing or out of place. They communicate without ever browbeating the listener. Warfield’s singing is another overall highlight of the song thanks to her great and varied energy. She understands the dramatic potential of the songwriting and tailors her voice accordingly. She’s especially strong during the chorus, but the style she demonstrates during the verses is appealing as well. Roadcase Royale is off to a memorable start with this single and the sum total of the band’s vast experience as professional musicians and songwriters comes through in every second of this song. They are off to a fast start. Side project or not, “Get Loud” has the sort of quality and high artistic standards we rightly associate with a band built to last. The sky’s the proverbial limit for a project like this and we can only hope to hear more of what they offer for some time to come.