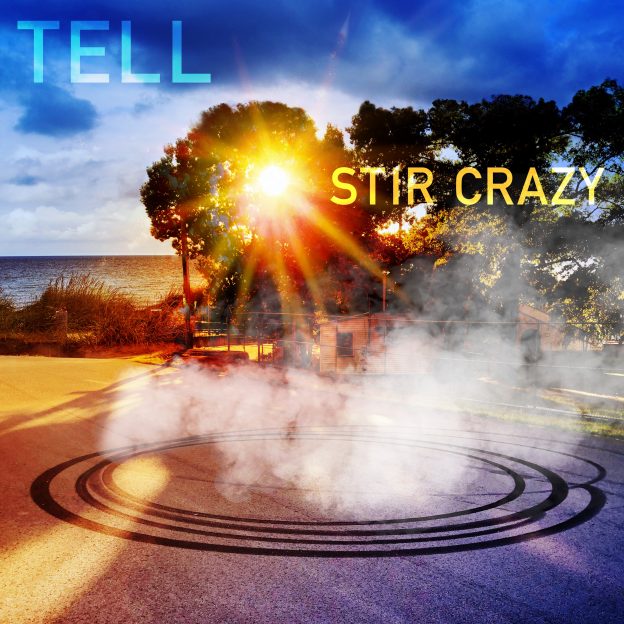 Musician and novelist David Wildman was called “Amazingly original and wildass awesome” by Chuck Palahniuk. Now he’s rocking the Covid with soulful songwriting in “Stir Crazy”, a new album from his fiery trio TELL out on Lunch Records June 11.

“Stir Crazy”, the infectious-in-a-good-way title song and video, presents the story of someone bottled up in a familiar hell. It’s rendered with stylish wit and high-energy guitar riffs that both shimmer and roar with the mixing magic of Paul Q. Kolderie, of Radiohead and Pixies fame.

Each of the 9 tracks has a story to TELL. In “Citizen of the World”, set to drop as a single on May 4, a man has everything except love. “Rosemary Goes Away” says the past must be destroyed to move forward. In “Eyes Grow Wide” an unusual child brings hope for the future, “My Kind of Lie” truth loses all meaning, and an old friend cracks up completely in the big, epic closer “Followed by Helicopters.”

Ted Drozdowski, senior editor of Premier Guitar calls Wildman a “world-class songwriter” and a “quiet visionary.” He says the music is “part new wave/punk and part art-rock (in the footsteps of Television and Pere Ubu),” and that “Wildman knows how to build anticipation, how to make love sound real, how to honestly tell a story …a real story … all the authenticity and character.”

Author/rock critic Brett Milano writes: “If you’re a first-class songwriter, being shut down just might wind up turning you loose. The songs here present flawed but recognizable characters, all making their way through a desperate era. It’s a lot like real life in these times, only catchier.”

Raffi and Wildman’s musical alchemy has been developing for years, playing together in various bands on the Boston scene. With this release they are operating at the pinnacle of their powers, despite barely seeing each other face to face while putting it together.

Wildman wrote, recorded and produced most of the tracks during the Covid, working with his home computer, laying down crunchy guitar and lush landscapes of keyboards and vocals. Paul Q. Kolderie heard the title song “Stir Crazy” and volunteered to mix it. That drew the attention of Lunch Records (John Doe, Dear Leader).

Check out their new video, and find out more about TELL on the links below and/or reach out via the contact information for interviews, reviews, stories and promotional access.

Up-and-coming Pop and Rock trio TELL are set to become an authentic new force in the genre. Boston-based, the group is led by songwriter David Wildman on guitar and lead vocals, complemented by Jay Raffi on bass and Chuck Ferriera handling drums. Getting together, back in 2007, under the guise of “The Unfamiliars”, Wildman and Raffi faced numerous roadblocks, changes and transitions before they set up stage under the name “TELL” in 2018.

Experimenting and establishing their icon in the Boston area, TELL found their big breakthrough after they decided to craft musical compositions separately during the quarantine, and then brought in old associate Ferriera to record drums in early 2020. Famed producer Paul Q. Kolderie volunteered to mix the single, which was later released fully under the expert oversight of Lunch Records.

David Wildman, the band’s leader has also had significant experience in political activism, journalism, novel and short story writing. Teaching guitar, piano and voice at Music-Go-Round in Natick, Wildman regularly performs around the Boston area, including solo gigs at local venues such as The Tavern at the End of The World, The Warp and Weft and The Plough and Stars.