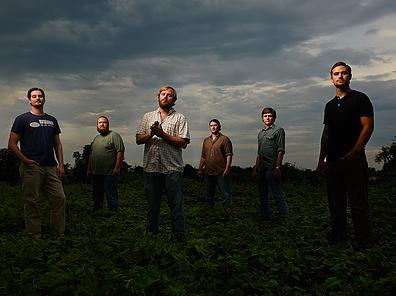 There is a playfulness to CBDB’s new album. Blending together various elements of rock music, funk, ska, and pop, what might have been a convoluted album is made consistent thanks to the pilfering of certain aspects of each genre. That is to say, they are sure to take the most fun aspects of their influences and throw them together into the melting pot. Whether it is the harmonious bounce of the vocals or the brief pause/start which evokes a funk breakdown at the bridge of the first song “Stuffed Avocados,” the tracks even occasionally break into a bounding keyboard breakdown. By keeping everything on the sunnier side of the sombre, the band is able to tie together even the loosest of inspirations.

Always with time for solos and inventions, they never shy away from a drum fill here or a guitar flourish there. The bass player, in particular, can take a great deal of responsibility for bringing a prominence to the technical abilities which excel across the board. His bass lines serving to keep everything together during the wandering spur of the momentary frills.

After grabbing the listener’s attention, they mean to hold it with grooves and allowing their funkier elements to come to the forefront. Even the faster pace of “Pschabango” settles into a half time rhythm, moving in and out of this as the almost military-esque snare rolls allow the singer to conduct his thoughts across the chorus and verse structure. The singer isn’t afraid to move into a higher register, with “Emperor” benefitting for a looser, floating vocal which occasionally spikes upwards a few semitones.

The band save the biggest tracks for last. After an album of four and five minute tracks, the closing two of “7 Seas” and “Numbers” both break the six minute mark, with the latter almost stretching to ten. These more progressive tracks ditch the tighter structure of the earlier work and attempt to indulge the slightly more left-field influences of the artists. With the musical affections in “7 Seas”, the band might have been expected to abandon the melodies and pursue their more technical abilities. Thankfully, this is not the case, with both of the closing tracks working hard to keep the audience orientated with catchy hooks. Changing up just enough to cover the track lengths, but not enough to grow wearisome. By the time the album closes, with the manic break down of “Numbers”, the band has taken the audience on a long trip around their most loved influences.