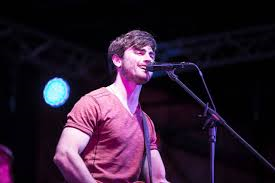 Cody Webb – More than a Little

Cody Webb, in his new single More Than a Little, “burns the porch light out” with his cute, vivid and fluttery zoom-in on the start of a contemporary fairy tale. The instrumentation is not too elaborate, but just right; setting stage for the soft lights, subtle gestures and the build-up to a moment that will forever be idealized.

His voice has a subtle twang to it, lending a freshness to lyrics such as “bye bye my heart, hello your lips”/I know where I’m headed after this kiss (…) more than a little in love with you.” It is as starry-eyed as a Disney soundtrack, and yet, surprisingly grounded too. The words are simple and sung with no frills whatsoever. It is easy to forget how effortlessly, and artfully they are strung together. It is the kind of ease that comes with playing the guitar since age eight, and performing all over the country!

I’ve spent some time researching Webb and he is a seasoned performer with a clean look, voice and sound. With the first single More Than a Little expect vintage country style instrumentation laced with a full array of players and superlative writing that holds the attention span perfectly. Straight away it’s clear to me that this release is the imaginative return to good country music popular about 10+ years ago with a few humor-laced songs and a few that will tug upon your heart strings as well. All tracks are fused with the better musical touches of today’s pop, all with the undeniable influence of classic country. At times Webb reminds me of Tom Waits, Jon Cale and even Eric Hutchinson to Matt Wertz. I must admit today’s music has many people feeling of bit of soullessness – how appropriate that I get a song like this. Like I had mentioned the single begins in hooky fashion. This song follows, and is a pleasant journey through a pop-folk passion play of Webb’s psyche while letting it all hang out.

By the time the chorus kicks in for the second time, you’re caught up in the moment too. And it is beautiful how Cody throws it wide open; capturing the anticipation, the warmth, the rhythm and the brightness of those few intimate seconds. It’s what any song should do, and teens and tweens especially might appreciate the heady rush described in the track. The brief guitar solo re-iterates the peppiness of the beats that follow it. This song is a must-listen for those who want to listen to something cheery, are on the lookout for a happy ending or if you yourself have got a serious case of the butterflies. It’s a theme that has been done, and overdone, and yet, More Than A Little succeeds rather than fails because of this. Despite the familiarity that surrounds it, it’s honest and it is simple; and all good songs start there.