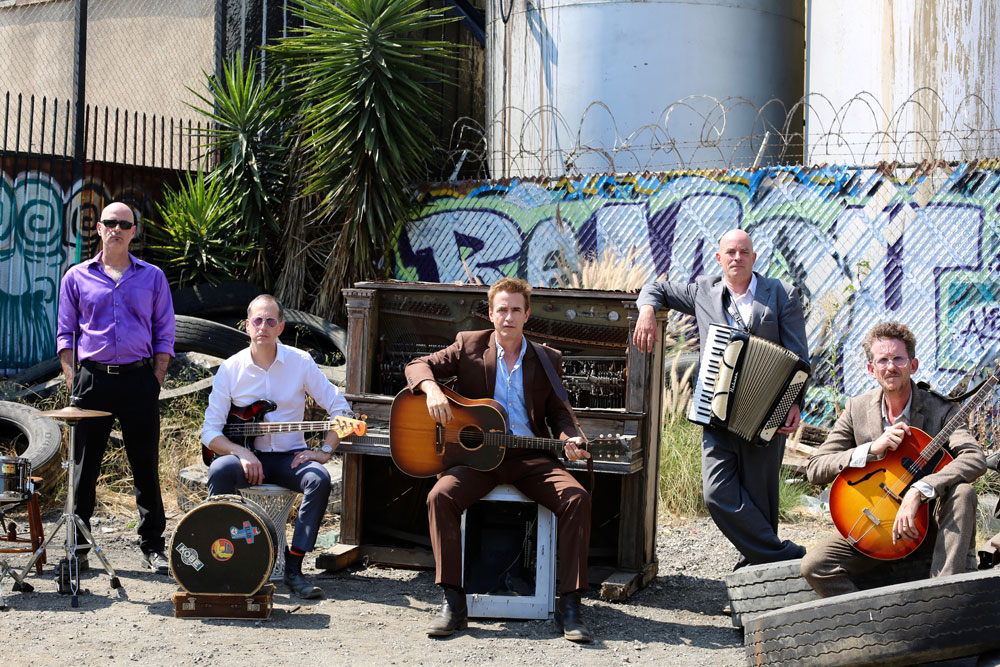 Cranky George certainly isn’t an outfit of wide-eyed youngsters looking to make their mark on an increasingly fragmented music scene. Each of the five members are veteran players and writers with extensive CV’s reaching back to the late 1970’s. The band’s accordionist James Fearnley, in particular, is something of a legend considering his status as a founding member of The Pogues. His long service alongside vocalist Shane McGowan ended eventually and, along with Dermot and Kieran Mulroney, formed The Low and Sweet Orchestra who scored big with their sole long player Goodbye to All That. The band later dissolved, but Fearnley and the Mulroney Brothers continued on to form the first incarnation of Cranky George. Despite a welcomed EP debut and an assortment of live gigs, the trio was unable to capitalize on its success thanks to other existing commitments. This is no longer the case. The band has reconvened with new members and their debut as a five piece, Fat Lot of Good, is scheduled for an October 14th release. The first single, “Nighttime”, lays the groundwork for what is certain to be one of 2016’s best releases.

The vocals are the crowning jewel on the song’s success. The lead vocal is deep, full of emotion and experience lived, but also brimming with the good taste to appropriately restrain itself. It also takes great pains to time its emotive peaks and general phrasing with the arrangement and the counterpoint achieved by the marriage of voice and music is quite complementary. The lead vocal is strong enough to carry the song completely solo, but the accompanying harmony vocals the band has added to the mix bring an excellent ingredient to the overall sound. The lyrical content has a traditional and serious slant, but it remains quite accessible to modern audiences and, much like the arrangement, doesn’t waste a single moment. The spartan reality of both the lyrical content and musical arrangement is squarely at odds with the sound and the fact makes Cranky George into magicians of sorts who summon impressive sonics without a multitude of instruments.

The musical elements are largely a blend of the tradition. Vocals, guitar, bass, and drums form the song’s foundation but have ample swing that gives the song a loose-limbed grace quite unlike similar efforts. There’s almost a quasi-waltz quality to the songwriting here, but it isn’t stressed to the extent that the time signature becomes the song’s focus. Everything is exceptionally well-recorded – there’s an uniformity of excellence in every area of this song that stems from a first class outfit determined to record and write up to first class standards. Cranky George’s “Nighttime” promises great things from Fat Lot of Good and offers ample evidence of their ability to realize the potential of this traditional music given a distinctly modern twist and sheen. History informs them. The members of Cranky George have worked with and among some true artistic titans, but now is their turn to shine.