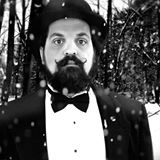 Dan Exactly is an odd duck, but an odd duck who can take pop, turn it on its side and give you an experience. “Two Left Feet” is definitely unique and that’s to be expected after seeing Dan Exactly. His look doesn’t fall into any particular area. Looking at him would render the mind to assume he was the lost brother of the lead singer of System of a Down. You’d think he’d open his mouth and hardcore vocals would come out. Instead you’re met with a song like “Two Left Feet” that’s anything but. It’s upbeat and has a pop edge that could slice the competition if handled right. With Jendor, “Only Fascination” is a true blue pop song that you’d hear on Vh1 because it’s not bubblegum, but like pop for grownups. He also has help from Dave Liebman on “The Blue Ocean,” which is more soulful than the others. It’s the slowest but still stands tall in the trio. If you’re into quirky music and like underground pop, yup that exists, then check out Dan Exactly. (https://www.danexactly.com/)