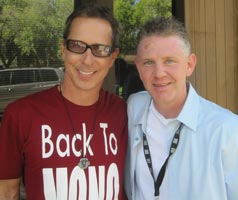 Interested in some great acoustic country rock? Check out David J Hartley, a self-taught guitarist who brings his own flair to the country genre. His debut CD is called Hard Times in Boredom Town, and it’s available at most online music stores. As David J Hartley says on his website, “Action is the watering of a seed’s success.” Nothing could be truer, especially for those who are interested in becoming musicians. Take it from David J Hartley, working hard will do a whole lot to get you towards your goal.

David J Hartley’s music is simple country rock. It’s not flashy or extravagant, but that’s what makes it so entertaining. It’s familiar, clean, and beautiful. Some musicians try to dress up their songs with lots of ridiculous, obnoxious effects because their music isn’t that good. David J Hartley does not have this problem. His music is great, and therefore it has no need for fancy effects and numerously layered tracks. His voice is great, too, and he hits all the right notes. His song “Country Fair” is a great example of this clean, country rock style and is worth checking out. It was even in Europe’s top 40 chart for 7 weeks, sharing space with country genre staples Toby Keith and Joe Nichols.

David J Hartley performs frequently in Las Vegas at many different locations in the city. Hard Times in Boredom Town has received great reviews from people all throughout Europe. If you’re interested in learning more about David J Hartley and listening to some of his killer tracks, then check out his website. Head on down to Boredom Town here: https://davidjhartley.net/