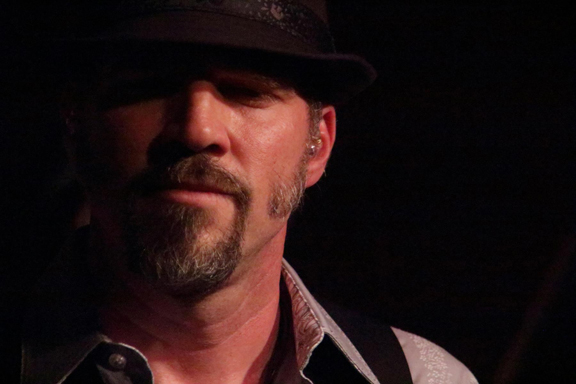 These kind of performers never get old and the best of them bring a big part of themselves to every song they do. Forget influences. Django Mack, for sure, will remind you of some other singers, especially on “’Round Christmas”, but he’s far more than just some trivially talented imitator. Instead, this is an artist who can pick up the mantle of longstanding forms, shake them around, and make something different from them. He can even tackle the longtime tradition of musicians releasing Yuletide themed songs for the holiday season and not sound hammy or melodramatic with the results. There’s a highly stylized vibe affecting every second of “’Round Christmas” that sounds almost like Texas blues with the emphasis on reverb and distance-miking that the guitars receive, but it also takes on that slow blues swing that’s so common in the genre. He’s got an ably bodied crew of musicians backing him up on both songs here.

They show a lot of great artistic judgment and restraint on the A-side “’Round Christmas”. The lyrical subject matter is well-worn, but such tried and true subjects are that way because they resonate with listeners. Unfortunately, many listeners will know about the heartache and loneliness that affects people during that time of the year. It is a time of celebration and coming together, but for many, it’s likewise a time for the airing of their deepest regrets. The guitar work snaking through this song alternates between being melodic and superbly atmospheric without ever dominating the track. Much of the song’s success, ultimately, comes from great in-the-pocket drumming that has a slow swing without ever losing the forward momentum that all songs need.

“Big Black Dog”, the single’s B-side, couldn’t be any more different than the first song. The guitars are not a factor and, instead, rollicking piano lines take care of the melody with considerable flair and the rhythm section provides a hard-hitting foundation that’s precise, yet finds a groove and digs in as deep as they can go. Mack’s vocal here doesn’t go in for the same sort of theatrics he conjures so readily on the A-side and the much straighter singing performance helps draw more attention to the song’s light comedic touch. There’s a strong sense of familiarity hanging over both songs, particularly this one, but it has a satisfying inevitability. It isn’t that he’s doing anything new or remaking the wheel – we listen, instead, to hear how well he hits all of the usual marks and hope he brings a bit of charisma or personality to his work.

Django Mack succeeds all around with these two songs. “’Round Christmas” defies lyrical expectations, to a certain extent, and it’s enough to justify its lead position while “Big Black Dog” is musically and lyrically entertaining whilst giving Mack’s target audience a welcome respite from the gloom of the A-side. This San Francisco based songwriter has made an impact in the indie music world and songs like this will only deepen it.