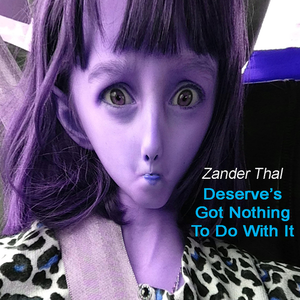 Singer/Songwriter Zander Thal’s Debut Album, “Deserve’s Got Nothing To Do With It” Successfully Mixes Electronic and Alternative Genres, Creating a Fresh and Unique Sound.

New York, NY – February 2nd, 2021- Up-and-coming singer/songwriter Zander Thal spent over a year perfecting the musical arrangements on his self-produced debut album. With the release of “Deserve’s Got Nothing To Do With It”, Thal is turning heads (and ears) with his rich, groovy beats and simple lyricism. Available widely on all top streaming platforms such as Spotify and Apple Music, Zander Thal’s indie music is surely the most unique sound to grace the ears of listeners in recent years.

Released on January 15th, 2021, “Deserve’s Got Nothing To Do With It” contains ten catchy songs, each with an accompanying instrumental track, enabling listeners to focus on the complex musical arrangements behind Thal’s syrupy, melodic vocals. In comparison to typical alt radio fare, the album possesses a bold musical nonconformity.

The album’s tone varies greatly. From the sweet sadness of “Looking For a Sign” to the moodiness of “Echo” to the high-energy silliness of “Heatwave”, Thal’s vocals somehow bind these tracks together and make it work in a cohesive manner.

Zander Thal independently recorded and produced the tracks in his basement, on a stringent budget. Composing songs while simultaneously working two jobs, one as a school teacher and one as an Uber driver, Thal intently kept his focus on what he loved– making music– and did what he had to do to pay the bills.

Zander Thal is an up-and-coming indie singer and songwriter from New York who is already making waves across the indie music scene.

He has been diligently writing music all of his life, but chose 2021 as the year to formally introduce the world to his unique sound.

Thal’s influences include Peter Gabriel, Phil Collins, Billy Joel, and Leonard Cohen. With a drive to keep producing music, he hopes to inspire and connect to the masses, and bring a much-needed fresh vibe to the music industry.