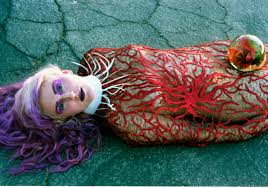 It’s almost impossible to pin down current California native Emily Gold and her twisty, turning debut album platter Recluse. Is it trip-hop? Not exactly, but it does have that kind of tangible beat. Is it rock n’ roll? Nah, not quite although it does have a few sizzling moments of riffage. Is it indie? Probably, but it’s got so much more scope under the hood. It’s not easy to describe and not necessarily easy to sell, but it’s just good music.

So Recluse serves up ten tracks that truly have a distanced from society, reclusive vibe running through their veins. “Drowning” sets the town and mimics being submerged in icy polar waters with fractured melodies, trance vocals and a subliminal rhythm oozing in the background. It sounds like a few artists in passing, but really not enough to drop a straight comparison. The title song is the same way as it pounds, punches and shoves with a brawny rhythmic backbone and guitars turned up in the mix; a seemingly straight-up rock song on first glance, but one with numerous indie trip-hop influences pouring out whenever you sit down to analyze it. “Cyanide Lollipop” is also on the rock-side of the track with touches of sodden acoustic guitar and light rock n’ roll arrangements along the deadly silent death-pop; throughout Gold demonstrates her ability to hit every desired note.

The album shifts gears into cruise control with the barely breathing, breathless trip-hop of “Love Moves.” Though the results are fun when Emily and the band up the volume and rock hard for a bit, their strength is in these desperate, darker dabbles. This tune is all poker-faced, deadly serious gambling with strong, husky vocals sliding over a greasy rhythm that’s soul, blues, noir and trip-hop all bottled up and left to explode like nitroglycerin. “Not from Here” is like an edgy version of a Disney soundtrack, both whimsical and threatening as the music morphs into a mini-symphony full of layered melody guitars, grooved bass, eerie digital ambience and elevated keyboards. It’s akin to Bjork trading shots with Portishead. An obvious choice for a single, “Out of Touch”, is without a doubt or second glance the bounciest, most pop-fueled smash on Recluse. Its chorus is practically lit up by bright Vegas lights and displayed for the whole city to admire.

Reducing itself to that primal, street lamp lit vibration, “Shadow” is a creeping ballad that practically stalks the listener and refuses to let up during its extended course of action. And “Dizzy (Let Go)” is much of the same with Emily’s solar-powered vocals giving a nice skyward stretch over pointed guitar noodling and bustling percussion from drummer Sean Draper. “Retrofitting” adds rock back into the mix only to be subtracted by crawling, suicide balladry of “Intangible”. It sets the stage for the hard rockin’ finale “For the Night,” which highlights Dave Burris’ scorching electric guitar and Emily’s voice which rises to a near scream before the proceedings come to a close.

Recluse will not be for everyone but those with an open mindset will absolutely adore the sense of exploration this album yields. It is truly deceptive and wistful in the way it builds and ratchets up a mood, although it never resorts to excess just for the sake of excess. Anyone into exploratory, experimental music would do well to give it a dedicated listen.