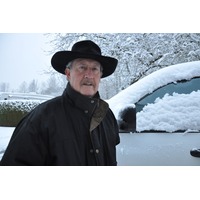 JD Taylor is a man of many voices but we like to sit in his Folk ways for as long as we can. “Honky Tonk Nights” is a little hard to hear the lyrics but the music does delivery that honky tonk time. One only wishes that the verses were more audible. A surprise comes with “Hearts Aren’t Made of Stone.” With the first song put on you had a sense that this was a Country artist but this one has a way different base. It’s more AC during the ’70s era. The music will remind some of TV shows set during that decade. Then we head back to the Country road but a more Folk like state with the cleverly titled “Enter Your Song Title.” This is the first one to really shine and showcase what JD can do vocally. His voice has a very natural state and doesn’t need a whole lot of bells and whistles. So that’s where one would want him to stay. It’s the right track. If you like Folk music then it’s time to give JD Taylor and his ways a chance. So give him a listen now. (http://www.jango.com/music/JD+TAYLOR?l=0)