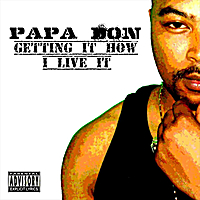 There’s a lot of underlying meaning to Papa Don’s music. He has made numerous albums that have nothing but the best quality in terms of production and lyrics. As soon as he released his EP “On The Rise” in July 2008, he immediately made his capabilities known as both an MC/Producer. Due to this Papa Don has set the bar pretty high for himself, but every song, EP, and album after that he sets the bar even higher. On his newest album “This Is The Life” Papa Don created one of most successful recordings as he used this album to inspire people all over the world.

“City Lights” beat is very cheerful and uplifting so are the lyrics. Lights have always been used as an analogy to talk about happiness and looking forward to the future. Papa Don has no problem doing the same-heading toward the city lights is always good sign and nothing will stop you as long as you’re going for it. Other notable tracks “This is the life” and “Getting It How I Live It”

This guy is a hustler having sold more 50,000 records on his own. He doesn’t need the big contract to accomplish things these major rappers could only dream of. This work ethic will definitely bring him to new great heights.To hear more music and buy his album go to https://hoodstarrecords.com/index.html.