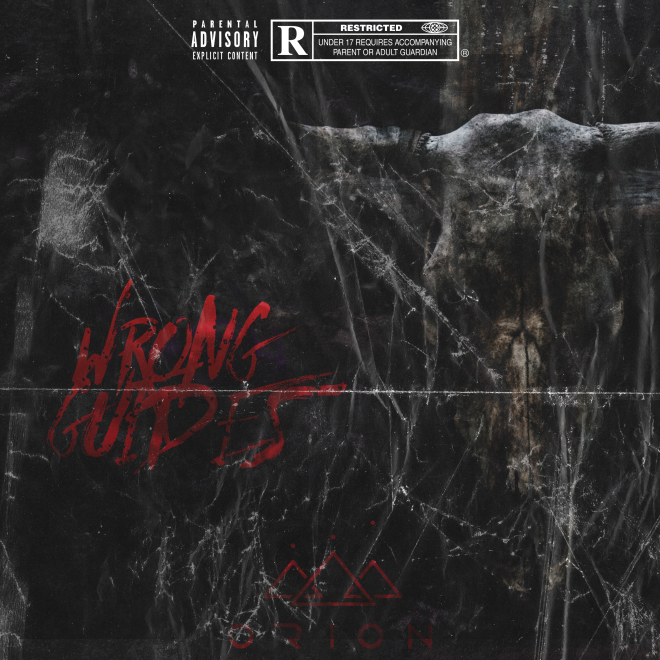 St. George, Utah — Sunday, December 22, 2019 — Musical artist Orion Swift has released his fifth single to close out 2019 in the form of a Dark Rap song titled “Wrong Guides.” The lyrics are intense and brutal, written from the perspective of an animal held in the slaughter queue of a factory farm.  Having been a vegan for compassion, health and spiritual reasons for more than a decade, the message behind this song is very important to Orion.

Coinciding with the Winter Solstice, and the artist’s birthday, Orion’s will be releasing his single titled “Wrong Guides,” on December 22nd to all major digital streaming services. The standard American diet is finally coming under question as more and more are waking up to the truth of where their food comes from and how it is harvested. For so long we have been collected following the “Wrong Guides,” who encourage us to consume energetic death in the form of meat and dairy. As more and more wake up to this truth, there is spiritual renaissance sweeping the collective consciousness. This track will appeal to anyone who is in search of a dark, new rap sound with underlying positive vibes.

Prior to the release, Orion held a pre-screening case study of an un-mixed un-mastered version of the song. When asked during an anonymous post-listen survey what this track reminded them of, here’s what people had to say:

“Monsters, the upside-down in Stranger Things,”

“Listening to music to get through my depression,”

When asked to describe this song, listeners said:

“Nothing shy of brilliant,”

“Climate Crisis / the rut we are all stuck in cryptically told we are on the “right path” when really our life is just being suppressed,”

“It’s like poetic justice in a world of unequal advantages,”

Taking a DIY approach to recording and production, Orion recorded the vocals in the front seat of his car using his iPhone. He then partnered with BGF Sound, a production company, to bring his vision to light. Orion has released this song under Vision: Message, his merchandising and media company.

A fitting conclusion to 2019, “Wrong Guides,” promises to be the heaviest, darkest and most aggressive release from the artist to date, with the most prominent message.

Follow Orion on your favorite music streaming service and Instagram @oriondarkrap, and check out his merch store!

Orion Swift is what happens when you take an artist who grew up in Seattle going to underground shows and playing in death metal and grindcore bands with his father, give him pop-punk and hip-hop influences, a pop sensibility, and top it off with master training in Reiki and a sense of spiritual consciousness. With a healthy appetite for esoteric teachings and a gnostic worldview, Orion views the process of making music as alchemical. To him, the ability to communicate ideas and emotions through the airwaves with vibrations and frequencies is akin to magick.

Born in Seattle in December 1990 to avid Metallica fans Sheri and Micah, Orion’s name was almost certainly influenced by the 1986 instrumental masterpiece of the same name from the ‘Master of Puppets’ album. With music running through him from birth, no one was surprised when a 13-year-old Orion co-formed and shared guitar and vocal duties with his father in the Seattle death metal/grindcore band, Immortal Divination. By 14 he was playing his first show with the band at Seattle’s El Corazon. By the time he was 16, he had already started another band, IDOLS, and continued to play with them into his 20’s.

At 22, he moved to Utah with his wife and mentor, MaryShae, where he studied Reiki healing, befriended psychics, witches, artists, and healers. He began his professional career in marketing with plant-based superfood company Sunwarrior in 2015. That same year, he crossed paths with the founder of eco-hip hop Ietef DJ CAVEM, Vita at the Sedona Raw Food Festival (aka Pure Living). CAVEM mentored Orion as an artist and inspired him to create music that cultivates love and positivity while sticking to his underground roots.

Following this encounter, Orion wrote and self-produced a concept album using only his iPhone with the stage name Sugar Venom 7. With no real audio engineering experience, the quality was not incredible, but it led him to meet and partner with Italian producer Marco Porrà, who was able to understand Orion’s vision and take his music to the next level. Orion then enlisted the help of Nic Bot, a professional graphic designer and fellow Sunwarrior, to create the artwork.

And after 15 years of making music Orion embraced his given name and started embracing dark rap in 2019 thanks to an old friend and confidant, DJ CAVEM. In his first year with his new project, Orion released a handful of singles including the first song he created for this endeavor, “Invocations” and a song inspired by a ride home with his grandpa after leaving his grandma’s hospital bedside. His first trip back to Seattle in some time, he noticed the countless rows of homeless encampments and when he got back home, “Road to Freedom” came to him as a way to start a conversation and shine a light on a growing problem in America.

Growing up going to shows and playing music with his metal-enthused dad, Orion got a headstart in music that many of his peers did not. That ingrained in him a passion that would go on to be as versatile as the music he once listened to in his bedroom as a youth. Today, he’s taken his expertise of various genres and molded them into what he defines as Dark Rap. To which he notes, “There is a small pioneering class of artists doing a similar thing, but my unique POV, musical background, and business/marketing sense cultivated in the growing Natural Products industry allows me to stay fresh and innovative from a holistic perspective.’

With such a strong and capable team behind him, Orion is ready to make an impact on the global music scene and collective consciousness by spreading good vibes and giving back to the universe through diverse underground music. By the end of 2019, he’ll have released five singles, the last being “Wrong Guides.” In 2020 he plans on releasing even more as he sets his sight on licensing deals, and getting label representation.