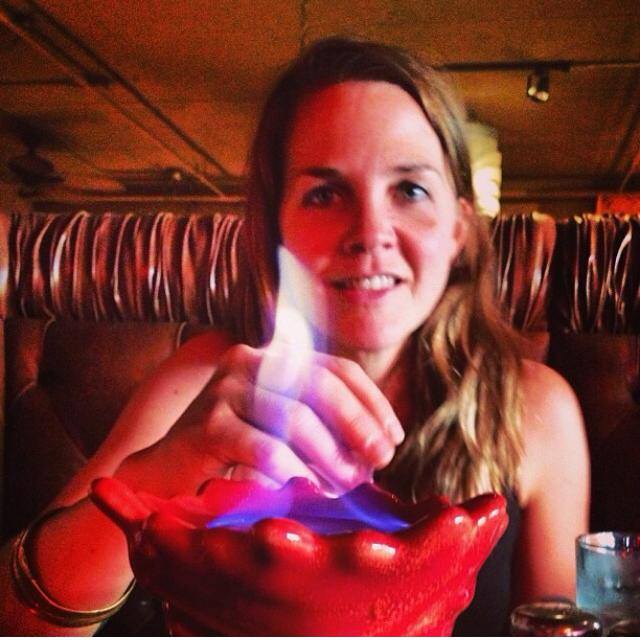 Duluth, Minnesota native Mary Bue is tough to pin down across the eight tracks of her latest slab Holy Bones. She certainly has a grasp on the rock fundamentals that many would be jealous of and knows how to infuse catchy pop where it matters as well. Besides that, she doesn’t shun her blues, country and punk influences and they clearly define her as an artist on the edge willing to take chances. Not all of her experiments work but they work more often than not and when they really hit the mark, they REALLY hit the mark.

The first half of this album is a bit deceptive in how it paints Bue as sort of a standard rocker mingling punk and pop. Opener “Candy” is all soft verse/electric chorus-format with solid guitar work by Bue herself and Kyle MacLean. The tune itself is entertaining and the rhythm section mugs hard for attention but comes off a bit standard issue when compared to the album’s deep cuts. “Cheribum” poises itself as a bit of a pop punk anthem that refuses to take up too much time, but never quite sparks to life. Bassist Brett Molitor’s prowling lows and drummer Marcus Matthews’s cracking beats steal the show, even if Mary does a fine job of putting together an easy to follow, three-chord punk riff with practically no dressing. Again, it’s fun material, but you can just sense that something is smoking under the hood of this Mustang that we haven’t seen just yet. That something, an indefinable quality, begins to take shape on the rustic acoustic blues of the title track. The additional organ coloring is a masterstroke and Mary bears down on the track with her most focused performance to this point. Bue’s voice warps to a curled, chunky blues demeanor that really gets the song’s point across and creates some memorable melody lines in the process. “Heart’s Desire” sinks down even lower into a rumbling tom drum pattern, thick bass power, spaghetti-western guitars and Mary’s tumbleweed kicking croons. Eventually the track develops a trotting, horseback gallop that changes the tempo up nicely, but for the most part this is a flat-out country jam with all the gravy you need. “Put Up” resorts to riff-y radio punk antics and it’s catchy, if not entirely fulfilling, with its rather sparse structure. The album’s final trio is where this musical desert really heats up with the country/blues/soul stick-ups of “Archaeology” and “Veal,” leaving closer “A Million Moths” to start off in the southland before whipping into a windy fury of heavy rock that is a bit more aggressive than anything else on the album. It’s a sound that fits Mary to a tee and she sure does sport the voice to sell the rock and the hook.

Bue’s been kicking around her specialized brand of versatility for nearly a decade now and experience has paid off in spades with Holy Bones. The record isn’t perfect as the songs rooted in 90s alternative are fun, if not a bit cliché, yet when she hunkers down in a deadly serious, country/blues scowl, she really knows how to give it an identity. This is a worthwhile listen for who like variety in their music.