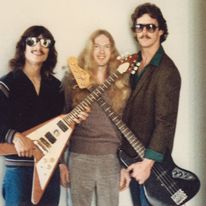 Through the help of incredible musical compositions released so far and a bunch of tunes in the works getting ready for release, rising band IT is looking forward to rise in ranks and climb charts in the world of music

Mitchell, Indiana – August 9th, 2021 – IT is an original Rock and Roll band, quickly rising through and taking over the world of music with the help of their unique sense of sound. Reminiscent of Led Zeppelin and with expertise in the genres of Hard Rock, Metal, and Progressive Rock music, the band will be releasing their next full-length album soon.

The three-piece band is immensely talented with over 100 years of Hard Rock experience combined between the three of them. While sharing a common interest i.e. love and passion for Hard Rock and Heavy Metal, all of them are unique and creative in their own ways. With artistic individuality and creative minds, all the members bring something new to the band, making IT a force to be reckoned with in the world of music. The band has been producing world-class Hard Rock music for two decades. Their debut album ‘Rock-n-Roll’ – available on Spotify, Pandora, Amazon, and other major streaming platforms – consists of a total of 10 outstanding tracks. Heavily dominated by heavy guitar riffs and powerhouse vocals, the songs are a piece of art and a prized possession for Metal fans around the world.

With overpowering themes of heavy Metal and groovy rock tunes capable of completely turning a dull crowd into a loud and energetic one, the band’s album ‘Rock-n-Roll’ is considered one of the best Metal albums out there. IT released 4 music videos from the album in 2015 and they can be seen on the YouTube links below.

The band also released album ‘ Jagged Line’ and several singles along their musical journey up until now. With all these incredible songs released so far and a new album release coming soon, IT is quickly rising in ranks and will soon come out on the top in the world of Hard Rock and Metal.

IT is an original Rock and Roll band, based in Indiana. The band excels in the genres of Hard Rock, Metal, and Progressive Rock, and is all set to release a brand new Rock album on which they have been working for quite a while now.

The members of the band include Joe Wilson (songwriter, vocalist, lead guitarist, and composer), Dave Metzger (bassist, backup vocalist, and Moog Taurus bass pedals), and Timothy John Thompson lead Vocalist, drummer. The three talents have seen and experienced the heyday of Rock n Roll with Joe performing to over a million people in Ocean Beach, CA for the 1980 4th of July celebration, Dave playing with Jake E. Lee and Bobby Caldwell, and Tim sharing the stage with many world famous bands like Blue Cheer, Traffic, Pink Floyd, Ted Nugent, and The Doors.