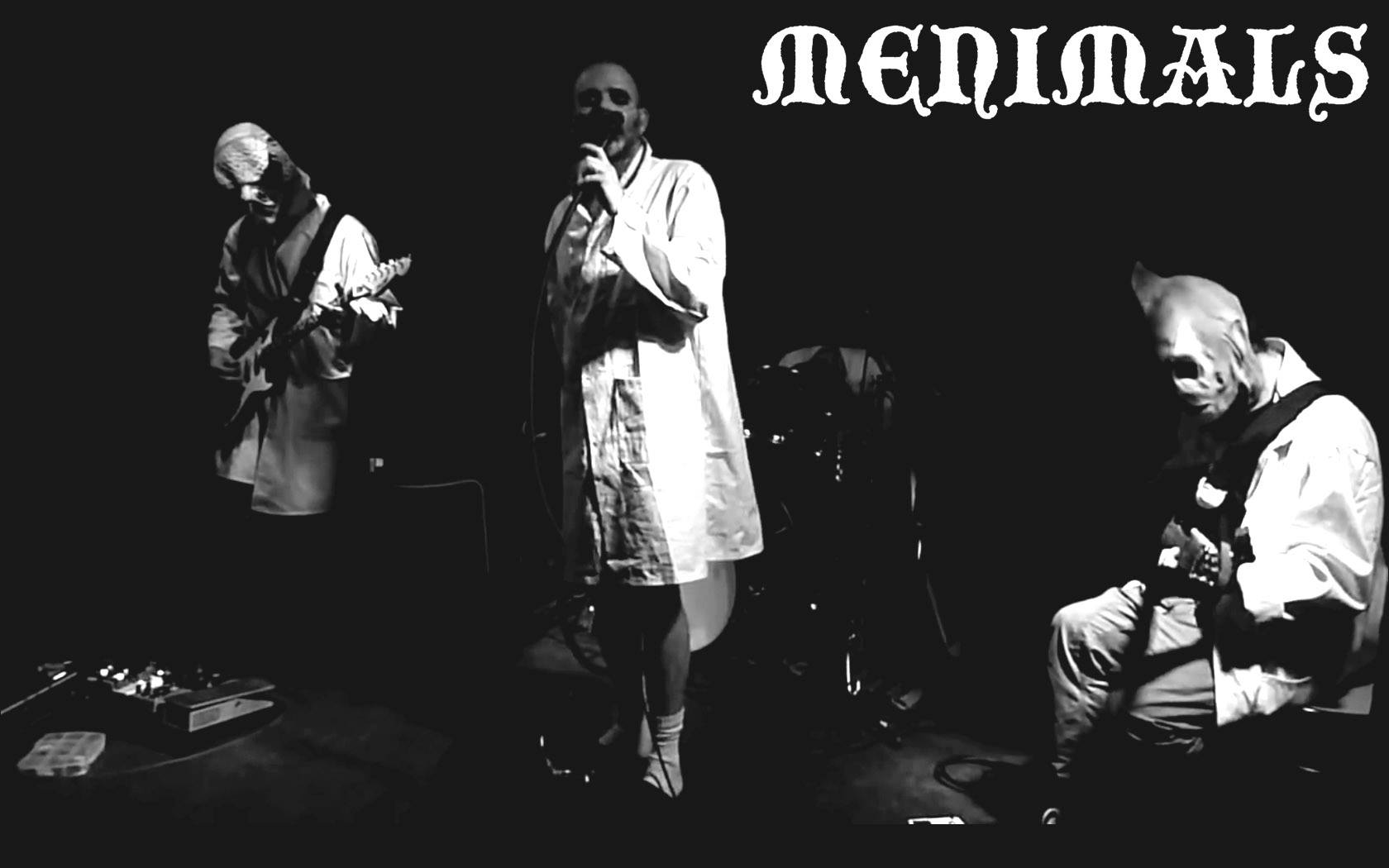 You will have no idea what to expect when you play this release for the first time. I can only help so much. The Menimals’ self-titled debut makes no concessions to the marketplace and pursues a singular creative vision that will alienate as many as it enthralls. The five tracks on the release reflect a marriage of discordant kraut rock with thick banks of ambient sound that immerse the listener with almost claustrophobic intensity. There is precious little sunlight on this album. The songs are turgid, their instrumental passages seemingly demolished by some angry hand, and fragmented into dark shards of sound writhing in a windswept world. The production emphasizes these aspects by burying any familiar musical elements far enough under the ambient murk that a gray haze seems to lock over them. The band’s presentation includes a complex mix of Platonic and natural philosophy augmented by an interest in alchemy, but it’s ultimately meaningless dross. The proof of the band’s merits doesn’t lie in their press materials, but in their wholly original and quite challenging musical adventures.

They do make some important gestures to convention, but as the album progresses, it seems more and more apparent that these gestures are merely intended to lure listeners in to their world. “In This Unforgiving Heat” nods to exotic Middle Eastern music and scales and balances its familiar flourishes. The vocals, in particular, make a spectacular impression swaying between darker passages and wailing peaks. The album’s second track, “Dodecahedron”, is perhaps the release’s most conventional track and makes great use of instrumental backing, but despite these apparent concessions to listener’s expectations, the Menimals are consistently overturning those expectations with their highly stylized approach to ambient music and capacity for surprise.

The balance leans much more towards the ambient side on “Tetrahedron”, but gently phrased guitar lines and delicate vocals dominate the early half of the song before enormous swells of ambient sound and electronica take over. The first half illustrates the band at their most delicate and the elongated melody, unlike elsewhere on the album, seems to gain a tenuous hold on the song before the swirl carries it away. The extended piece “Transition from a Cube to the Octahedron” does an excellent job embodying the pain of birth and transformation, but the mood of the piece is such that one wonders if there’s any light to be found in the experience at all. This is the album’s nadir – not in terms of quality, that remains high, but the track seems conjured from another place beyond human understanding rather than a conscious and constructed sonic work.

The album’s last number, “Bird on the Wing as a Hinge”, covers similar musical ground and even has a similar running time. However, keyboards play a much bigger role here than in other songs and the dissonant guitar fills add much. The vocals retain their hushed, ghostly reverence, but remain discernible throughout. It’s an appropriately enigmatic, yet honest, ending to an album incapable of being anything it isn’t. This is high concept progressive rock that utilizes elements from a variety of genres; the Menimals may not be every one’s cup of tea, but the experience of hearing their debut will compel you to grow as a listener.