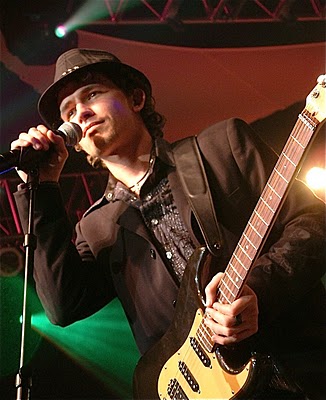 There’s good reason to be leery of releases from music talent show winners. The big two of the last twenty years in that genre, American Idol and America’s Got Talent, have catapulted a handful of substantive performers into the limelight. However, most are rightly regarded as essentially facile talents who fell into obscurity soon after the bloom faded off their contest win. Michael Grimm, five years removed from his Season Five win on America’s Got Talent, has proven his staying power isn’t the result of promotional skill, but real talent. The Colorado native doesn’t lack for material on his latest effort – Grimm presents twelve impeccably produced tracks designed to maximize mainstream appeal.

This is nowhere more apparent than on the album’s opener, “Generation Next”. The music overflows with energy – the bass, in particular, thunders through most of the song practically providing the top line melody through the verses. The rhythm section reins themselves in on the chorus and steadying those crescendos deepens their impact. “She Drives Me Crazy” is pure pop confection with a bit of sly, winking humor worked into the lyrics. The music is refreshingly direct after the chaotic first track, but the lack of any clear melody weakens things. “Black & White”, however, manages to bring melody to the fore for the first time. It’s one of the few truly signature songs on Grimm that isn’t littered with an array of tropes and/or images cribbed from other sources. Grimm’s vocal phrasing is a little unimaginative, but his performance is consistent throughout the album and particularly here. The music in the chorus is a little overblown, but Grimm anchors it by how he holds his notes and the emotion in his voice.

“The Tide” opens with strong guitars and hits a rockier Bob Seger vibe that many will find appealing. Grimm wants to pose himself as a passionate, yet reflective figure but what seemingly holds him back from knocking that persona out of the park is the boilerplate presentation that keeps imposing itself on otherwise promising tunes. “Roses” tells the same tale. It’s easy for lovers of the form to appreciate Grimm’s light-blues rock tributes, but even a moderately close listen reveals warts on an otherwise lovely surface. Grimm’s vocal, as too often happens on the album, redeems a weak lyric happy to rehash stock images from older, better songs. There’s no shame to feel invoking tradition. Calling on familiar images in intelligent or clever ways, perhaps reframing things in a different context, is a great songwriting quality. Relying on it in lieu of working hard to say something new is another matter entirely.

“Lonely” provides a genuine compelling more early on when Grimm sweetly sings “I like you just the way you are/crying in your bed”. He takes a dramatic pause just after the word “crying” and the effect is sublime. Grimm’s songwriting, whatever problems it may have, never shies away from darker material, but he steps back from the opening line’s promise into another formulaic song. “Tragic Figures” takes on some of the trappings of a hard rock stomp, but the minimalist verses and overwrought choruses continue a pattern heard elsewhere on the album. However, the lyrical content here is much more original than on many earlier songs and Grimm sings it with ample conviction. “Goodbye Sammy” opens with the bass alone and the punchy notes fall into place with the rest of the band when they come in. The uniquely personal address of this song, quite unlike anything else on the album, helps set the song apart naturally, but the uncluttered energy the performers bring is equally impressive.

“Bliss” takes a decidedly softer edge than its predecessor, but there’s a lot juicy bits in an otherwise undistinguished song. Most of the material on Grimm stresses groove over melody and “Bliss” is no different, but perhaps the deepest offense is that, yet again, Grimm perpetuates the same chorus we’ve heard elsewhere and expects us to buy it. The disconnect between such presumed lyrical depth, yet a steadfast refusal to crouch in any distinctive way, makes my head hurt. Its follow-up and the album’s second to last track, “1982”, balances some relatively serious subject matter with a humorous edge and no small amount of originality to help create one of the album’s most likeable numbers.

Make no mistake – in its total effect, Grimm misses more than it connects. Grimm plays the 1995 AOR rock guy a little too often and saves any significant departures from the script until the album’s second half. The dated approach serves no appreciable end and a little bravery isn’t enough. Michael Grimm shows enough talent here to save the album from a full-on disaster, but it’s such a needless struggle. There’s a finer, braver voice that we rarely hear on this latest release, but those echoes and brief flashes will have to sustain listeners for now.