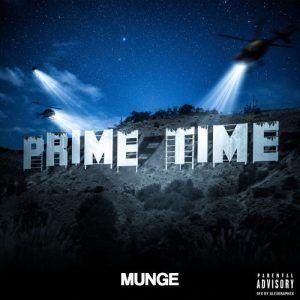 Buffalo, New York – April 21, 2020 – When it comes to talent coming straight to the world from Buffalo, NY, look no further than Munge and his 2020 release, ‘Prime Time.’

‘Prime Time’ follows the release of ‘Rate R,’ and showcases not only Munge’s trajectory towards greater things in all things music, but is stacked 10-songs deep with pristine hip hop excellence. From the press of play songs like “Different” makes audiences think, while “Ideka (I Don’t Even Know Anymore” is encased in a melodic beat that takes it to new levels. Each track is something new be it the heat of “Pain” to the quick tongue of “No Help.”

Munge came into this world down south in Georgia, but his family relocated to Buffalo, NY when he was just a toddler. So he reps upstate as it’s the only world he’s ever known and where he came up. While he grew up listening to hip hop, he didn’t start to make his own rhymes until he was 17-years-old. Fast forward to three years later and he’s two albums deep and heading towards being one of the most prominent names in not only hip hop but music, to come out of his area.

He’s faced his own highs and lows in life, endured more than most but still came out the other side with tales to tell. Some can be found on his latest album, ‘Prime Time,’ which is available now on all major streaming and music platforms such as Apple Music and Spotify.

Those interested in adding new hip hop to their playlists, reviewing ‘Prime Time’ for their site, or interviewing Munge on their podcast, site, or radio show can reach out via the information provided below.

About:
Munge is proud to present his sophomore album and 2020 release, ‘Prime Time.’