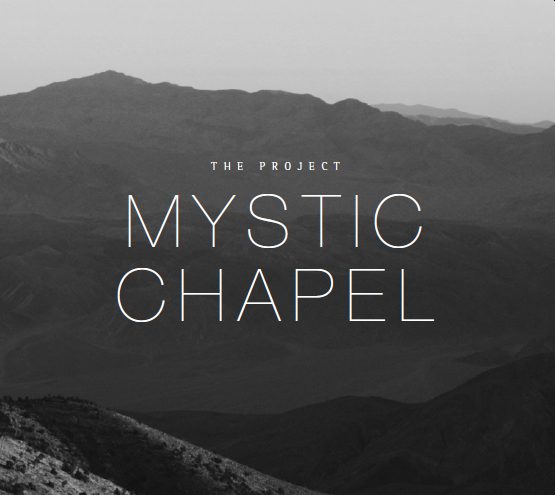 The first album released by The Project – Martyrs Prayers – was a masterpiece which explored different aspects of Christian Martyrdom in the words of a number of prominent martyrs themselves. For their second outing, however, The Project have chosen a much less intense theme – a meditative mystical “mountaintop” experience inspired by the Easter Liturgies of St. John Chrysostom, the great theologian of the Eastern Orthodox Church. In place of the variety of styles and moods presented in Martyrs Prayers, Mystic Chapel offers a consistent, contemplative feel throughout, dominated by acoustic guitar and vocal harmonies, although often augmented with other subtle instrumentation. Even the structure of the songs themselves on Mystic Chapel reflect this intentional change of tone. Instead of the dramatic build-up of emotion we find in the songs on Martyrs Prayers – as the musical themes are continually expanded and developed – the songs of Mystic Chapel rely on simple repetition to convey its serene message.

The album takes us on a liturgical journey which works on two entirely different levels simultaneously. The first is the way in which it carries us through the Easter Liturgies. After the instrumental Prelude, we have an opening song of praise – Come Let Us Worship – which combines elements of the Psalms, of the Kyrie, and of other ancient texts. This leads into a setting of the “Phos Hilaron” – Joyous Light – a beautiful canticle associated with Vespers (evening prayer), placing us, therefore, in the evening before Easter morning. The song ends with a transitional instrumental passage, carrying us through the night in anticipation of the sunrise, and flowing seamlessly into the next song – Hypachoi – in which the dawn arrives and the angel announces to the women at the tomb that Jesus has risen. This sequence is perhaps the most effective portion of the entire album. This is then followed by a celebration of the resurrection in Death Is Destroyed as the full light of morning is revealed. We Sing with Angels is then an adaptation of Mary’s Magnificat, recast in the light of Easter, now that the promises given her by the angel before Jesus’ birth have been fulfilled by the angel’s announcement of his resurrection. The whole church joins in joy with Mary and the angels in From on High. The album then ends with a meditation on the Lord’s Prayer – Holy Father – and a final instrumental Postlude.

But all of these songs have also been arranged in such a way as to reflect the basic pattern of the ancient Jewish synagogue service, which also became the pattern for Christian worship, a four-part pattern of Psalms, Scripture lessons, meditations on the Scriptures, and Prayers. Here, the songs of praise – Come Let Us Worship and Joyous Light – serve the function of the Psalms, an initial service of praise. The Scripture lessons, here telling the story of the resurrection, are found in the songs Hypachoi and Death Is Destroyed. We Sing with Angels then serves as a meditation on these lessons [corresponding to the Sermon in most Christian services], which is then followed by the people’s response in From on High, a basic creedal statement. And finally, Holy Father serves as the Prayers of the people.

What all of this means is that Michael Glen Bell and Duane W. H. Arnold know exactly what they are doing. These patterns continue to provide the shape of Christian worship because they speak to us on deeply spiritual, emotional (and even intellectual) levels.

Yet all of this is also contained within the overarching “story” of the album, of a traveller, weary of the world, who stumbles upon the Mystic Chapel and is transformed by his experience there, so that in the end he returns to the “real world” with new hope and energy, which is of course precisely the effect Christian liturgy should produce. This transformation is portrayed in the Prelude and Postlude, both based on the same themes, but conveying quite different moods. The Prelude is dark and foreboding, expressing the searching and uncertainty of the traveller, whereas the Postlude, through the use of a brighter sounding electric guitar in place of the acoustic guitar of the Prelude, and by modifying some of the minor chords of the Prelude to major chords (and indeed, ending on a major chord), reflects the new-found hope and peace of the traveller.

In summary, Mystic Chapel is a gentle and positive album, soothing to the soul, just as Martyrs Prayers was challenging.