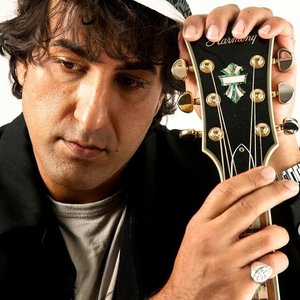 Living in the Queensland area of Australia, Omid Master has carried his music off for tourist crowds, in organized live performances, and two studio albums. Three songs from his forthcoming third studio release give us a significant peek and where this talented vocalist and songwriter intends to next take his music. “I’m Going Crazy”, “Only You”, and “When I Close My Eyes” are obviously tailored and aimed towards great commercial success, but they are substantive as well and have important personal statements to make that Master brings off with an utter lack of solipsism or self-indulgence. He’s a songwriter with his eyes on the prize – in this case, expressing the reality of his life and connecting with the widest possible audience. This trio of songs is accessible, stamped with a signature approach and sound like they could have been written and recorded by no one else despite any familiarity they may encourage in the listener.

“I’m Going Crazy” has some generous amounts of tasteful electric guitar powering it, but Master has an unabashed bravery about the way he uses acoustic instruments in a pure pop setting. Melody isn’t in short supply with this track, but the vocal melody is particularly distinguished. Master glides through its twists and turns with a naturalness that accentuates the song’s strengths and manifests a multitude of emotions. The instrumental mix comes together quite nicely and highlights Master’s talent for singing with the arrangement rather than juxtaposing his voice against it. “Only You” conjures up some familiar sentiments for pop song craft, but Master once again mines fresh gold from presumably long exhausted veins of riches. The acoustic guitar is much more prominent here and Master achieves a silky synthesis with its playing while still feeling free enough to explore his emotive range in full. The song runs a little longer than the opener and affords Master’s musical collaborators a chance to stretch out a little as players. They do so to supremely entertaining effect.

The last of the three cuts, “When I Close My Eyes”, is certainly a bigger production number than the aforementioned songs and whips more sonic energy. It has a slightly orchestrated feel, but never so overtly that the track ends up sounding premeditated. It is a spotlight moment for Master’s vocals and he takes full advantage of this moment by pushing his vocal chords as far as they can go. The result is an emotional showstopper that never risks sentimentality and hits listeners with a genuine wallop. Omid Master shows us a variety of musical faces on this release and none of them ever feel stagy or anything less than completely committed to providing himself and his audience with the release they crave. His third album, based from these songs alone, should establish him as one of the best performers and writers out there now.