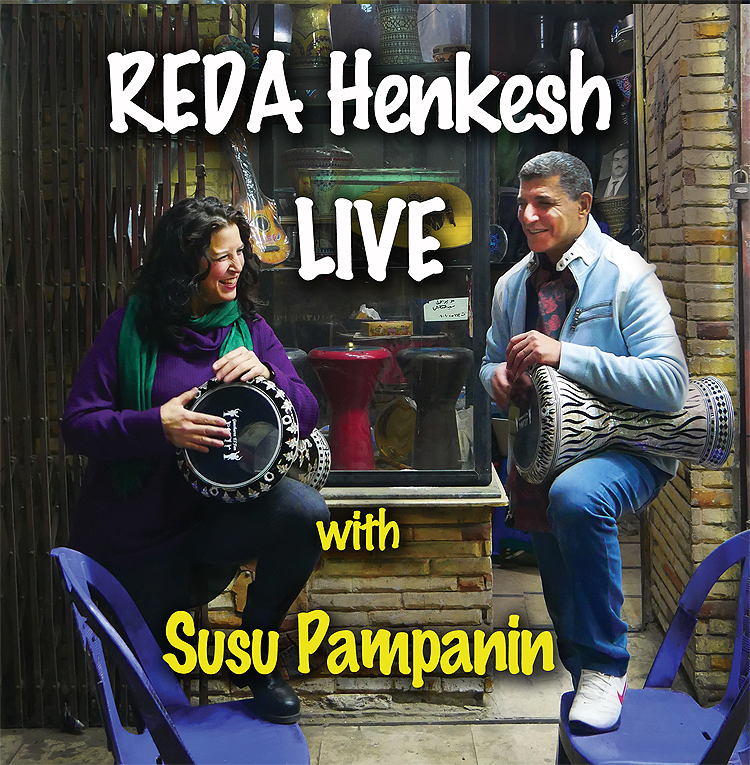 The tabla, or darbouka, is a goblet drum used in all Middle Eastern music. Reda Henkesh is one of the best tabla players in the world. And Susu Pampanin is the best female tabla player in the USA. Together, they have created a mesmerizing album set for worldwide release on June 20, 2021.

Bethesda, Maryland – June 21, 2021 – Most fans agree, it’s impossible to sit still during a Reda Henkesh concert. Some have even been seen twerking in their seats, which is not surprising given this master percussionist’s experience. Known throughout the Middle East as the lead tabla player for Egyptian superstar Mohammed Mounir, Reda is also the youngest brother of the late tabla legend Khamis Henkesh. In short, he is one of the best drummers in the industry today.

Now you can experience the spontaneity and energy of his live performances in the comfort of your own home. All but the first two tracks of this double album were recorded live during a series of belly dance workshops with Yasmin Henkesh in 2019.

Part One captures the magic that occurred during Reda’s initial jam session with Susu. The two traded riffs for extended round robin group exercises, which is why many of the tracks are over 10 minutes long. Laughter and screams abound as the dancers clap and share their joy. The format and fun continue for Part Two, which was recorded without Susu at Serpentine Studios in Bethesda Maryland. As you can guess, the music is ideal for dancing, drilling, practice, working up a sweat or simply trancing out.

Reda Henkesh, based in Cairo, Egypt, is the lead tabla player for Middle Eastern superstar Mohammed Mounir and the youngest brother of the late tabla legend Khamis Henkesh (lead drummer for Ahmed Adawia). He has also worked with many other Egyptian greats including singers Wadia al-Safi, Ahmed Adawia, Hany Shaker and Mohamed al-Helou and dancers Nagwa Fouad, Shoo Shoo Amin, and Mona as-Said.

Susu Pampanin has an innovative drumming style uniquely her own. Based in San Francisco, she is a much loved teacher and performer, not only in her home town but at festivals and concerts throughout the United States. As the daughter of a prominent Bay area belly dancer, she was surrounded by Arabic music from before she could walk or talk. At age 12, her mother suggested she learn the drum and her obsession began. Susu has studied under master drummers Vince Delgado, George Dabai, Yousef Mustafa El Effendi, and Nagib Al Bahri and accompanied decades of dance classes, rehearsals, and troupe performances around the world.