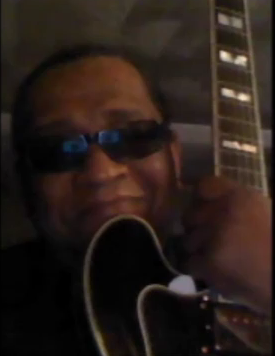 Some of the coolest beats this side of the Mississippi are given to us by none other than Ricky Pettis. Ricky Pettis is a smooth R&B, jazz guitar player. His music is soft, easy to listen to, and displays creative use of the electric guitar. Ricky’s lead bits are bright, fun, and expansive, as they creep all over the fret board.

Ricky’s music isn’t sustained by guitar alone, however. There are momentous fills and explosions of brass instruments like trumpets and trombones thrown into the mix, too, especially in his song “Can’t Stay Here.” The lead guitar in “Can’t Stay Here” reminds me of some early blues stuff mixed with jazz in a style that mimics Stevie Ray Vaughn. The song has just the right tempo, and the effects aren’t too overwhelming. They fit the song just right, and when the piano comes in to compliment the guitar’s part, the combination is just fantastical. Another great song by Ricky Pettis is called “I’m Just Sayin.” This tune uses a cool, jazzy guitar lead over an even jazzier rhythm and piano section. This is the kind of music that you can relax to, but it’s also the kind that makes you want to jump on your guitar and jam along. The lead playing shows great skill, and the different guitar distortions and effects sound unique and interesting.

If you’re more interested in finding out about Rick Pettis, check him out on YouTube. He has his own channel with several different songs you can listen to. Catch Rick Pettis here: