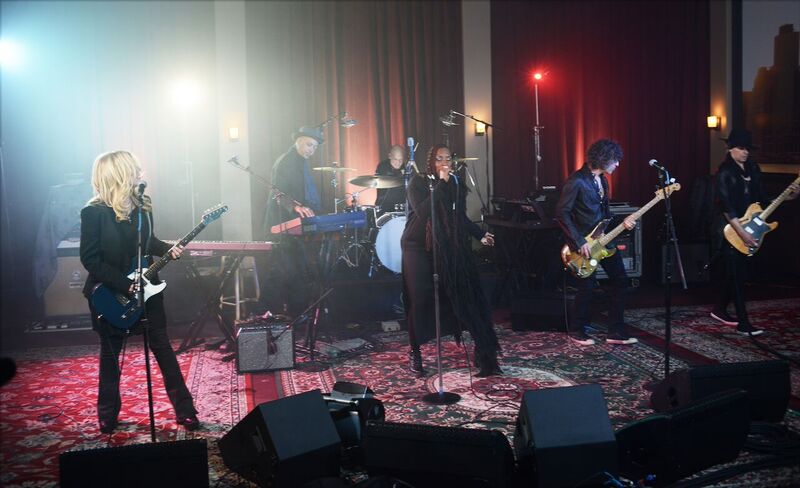 Roadcase Royale “Not Giving Up”

I have been a fan of Heart for many years. They were a big part of the formative music of my life. So, when I heard that Nancy Wilson was a part of this project, I was excited. Well, this song doesn’t disappoint. It’s just so good. There are two women who sing in this band, Wilson and Liv Warfield. The rest of the band is made up of three guys from Heart (Dan Rothchild on bass, Ben Smith on drums and Chris Joyner on keyboards) and guitarist Ryan Waters. There are parts of this that sound like Heart, but almost like Ann Wilson instead of Nancy. Then again, I’m not sure which woman is singing which part on this. The two voices have a tendency to sound close enough to one other to really complement each other well.

If you listen carefully to each passing second of this song it expresses something encapsulated in one complete moment of time. To me it’s comparable to looking into then suddenly experiencing what it is to be inside a snapshot of time. Some of the snapshots are silly or laugh-out-loud funny. Others are of contentment, exuberance, sadness, reverence. It’s a time capsule of time. “Not Giving Up” delivers everything the title implies and triumphantly creates the classic Theatrical Pop musical environment. The single gets off the ground nicely with its alt-rock groove, cool message, and vocal exuberance from Warfield. I must say this gal does a great job next to Nancy Wilson – those are some big shoes to fill I might add. This song benefits well from a powerful generation of musicians with similar interests in classic rock but varying tastes still appealing to modern contemporary fans. With a sound ranging from Pop, Classic Rock and Rock n’ Soul this band deliver a unique sound that translates well into the listeners world. The keys and notes fall smoothly yet effortlessly and with every second that passes as if these notes and words were meant for each other. Warfield possesses an immense amount of vocal talent and has an impressive vocal front. The musicianship is amazing offering much in the way of musical variety and Top Tiered playing.

This is hard rocking. It’s based on a blues rock sound that’s quite vintage. Yet, it also has a freshness quality. It really gets quite soulful, too. It makes good use of the contrast between mellower and more powered up sounds. All in all, this is a song that rivals a lot of the music Wilson has done with Heart. That really says a lot.