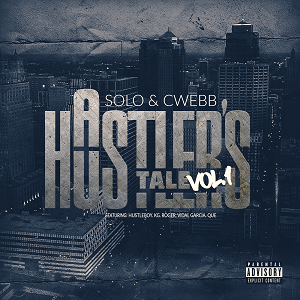 Atchison, Kansas – January 9, 2019 – Solo and C-Webb are representing a lot with the upcoming release of their debut,A Hustler’s Tale Vol. 1. Not only the heart of America, but also their family as the two are brothers, and also their label Y.N.F.A Records. While that may have put an overwhelming amount of pressure on some, it has yet to phase the Midwest duo.

A Hustler’s Tale Vol. 1 has been a lifetime in the making as Solo and C-Webb have been spitting rhymes with one another for years. Growing up together they’ve shared a lot, including their passion for music. Come 2018 they went from dreaming about it to making it a reality with the release of their debut single in February. “Steal My Shine” was just the beginning as it was followed by a handful of other songs, including their latest single, “Young Age.” Each gave audiences a taste of what was to come from Solo and C-Webb. Now the time is almost here as the release of A Hustler’s Tale Vol. 1 is coming in early 2019.

Solo and C-Webb aren’t just artists, but entrepreneurs as well. They are co-owners of Y.N.F.A Records alongside Harry Wilcox and Steven Thompson. In fact, A Hustler’s Tale Vol. 1 isn’t just a family affair between Solo and C-Webb, it’s also a Y.N.F.A Records family affair as audiences can hear Roger, Hustle Boy, and KG lending their talents to throughout the record as well.

Those interested in featuring “Young Age,” getting an advanced copy of A Hustler’s Tale Vol. 1 to review, or interviewing Solo and C-Webb can get in touch via the information provided below.

About:
Solo and C-Webb are artists and co-owners of Y.N.F.A Records who have a new album entitled A Hustler’s Tale Vol. 1 dropping in early 2019.