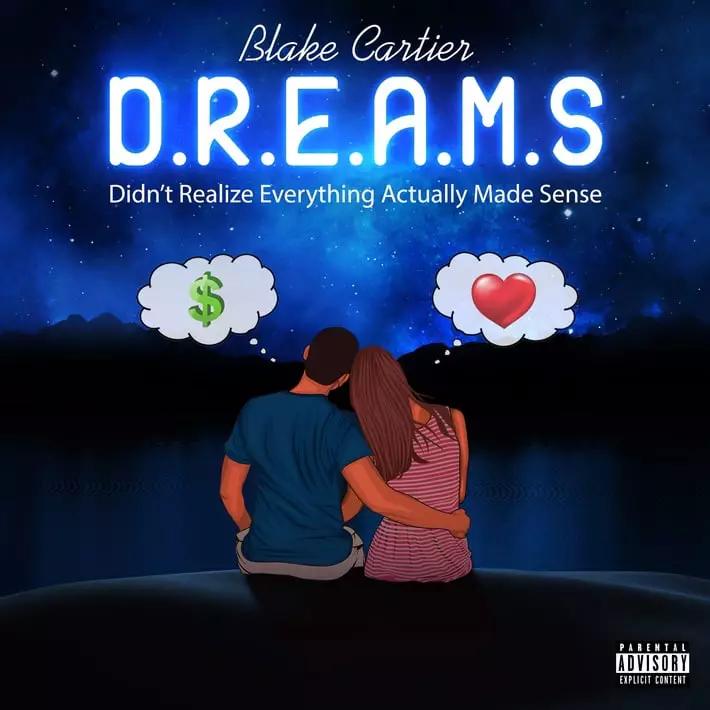 Brooklyn, New York – October 3, 2019 – When it comes to hip hop and game-changers, New York is without a doubt one of the top places to look on the map. From Jay Z to Nas, NYC has been prominent in building and maintaining hip hop’s influence since the late ’70s. Now the city is adding another name to the list with the release of Blake Cartier’s D.R.E.A.M.S: Didn’t Realize Everything Actually Made Sense.

10-tracks deep, D.R.E.A.M.S presents the culmination of a lifetime of determination from the Brooklyn-based emcee. A witty lyricist with melodics for days, Blake Cartier has made a name for himself locally for the tasteful sound he leaves in his audience’s ears. Now he’s looking to spread that across not only the US, but the world with his debut album.

Blake Cartier didn’t go at this alone. His dreams are not just his own. Working with the likes of Flyboii Dada, Braddy Tonia, Downtown Dion, and Gion Mondana throughout the record gives D.R.E.A.M.S an extra pop.

Those interested in adding new hip hop to their playlists, reviewing D.R.E.A.M.S, or interviewing Blake Cartier can reach out via the information provided below.

About:
Blake Cartier, one of New York’s leading lyricists on the rise, has dropped his debut album D.R.E.A.M.S: Didn’t Realize Everything Actually Made Sense.