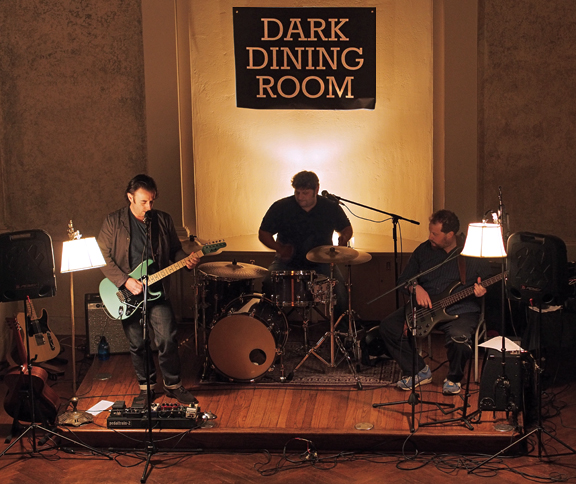 There’s nothing as uniquely frustrating as an almost-great album. You can take pleasure from the numerous good points, but certain types of serious listeners will hear how largely satisfying songs could be resounding statements with an improved mix, a better bass line, or increased variety. Colorway’s The Black Sky Sequined is an easy album to like. This Northeastern-based power trio doesn’t limit themselves to a few set poses and drown in a sea of rock clichés. They have genuine creative vision and aren’t afraid to take risks. Unfortunately, however, the album has moments when they veer off course and otherwise promising material loses its luster.

The dichotomy is obvious from the start. “Gen Exit”, short for generation exit, teeters on the cusp of being an outright instant classic worthy of immediate inclusion into the best of modern rock bands today. However, the lyrics can’t carry the day entirely. The band errs in surrounding a top-notch lyric with an energetic but black and white guitar attack embracing minimalism as a style rather than a natural outgrowth of the song. In short, it sounds a bit too calculated to resemble passion. These problems are lighter in the album’s first single, “Come Back July”, thanks to an even better lyric negating their impact. Main songwriter F. Alex Johnson does an interesting job of turning the typical “summer song” clichés on their head, but the song falls in one crucial area when it never resolves itself with a satisfactory climax.

“Explain” is probably the album’s best song. Colorway are strong with conjuring atmospherics when they try and this track has a slow, woozy pace highly appropriate for the lyric’s damaged narrator. An assortment of earnest, well-meaning failures big and small populate Colorway’s world and Johnson’s vocal conveys resigned strength. One can never be sure of a final victory in Colorway’s songs, but one can be sure of enduring. “The Cycle” is a curious track and slightly out of place. A brief, poeticized lyric seems an afterthought on this mostly instrumental track that stumbles guitar-first into a series of skillfully played, but ultimately familiar licks.

The album’s final song, “Telephone”, is another clever lyric that works on a few levels. Humor, usually dark, plays an important role in many Colorway songs as a sort of tempering influence over creeping despair and it’s no different here. Johnson, also the band’s lead singer, sounds genuinely bemused by the modern world’s unique brand of alienation. Colorway brings horns into the song, but despite the surprise, they really have no effect on the song’s quality and, if anything, are uncharacteristically unnecessary distractions.

It’s a mixed bag. It’s good advice to listen to this album from beginning to end before making your mind up about its quality. Colorway will appeal to retro-minded music lovers if no other reason than the fact that they make albums, not collections of singles, and their efforts are best experienced in their suggested order. Dipping into this album at random might give listeners the wrong impression. Perhaps the old paradigm still holds true and the band’s third, yet unnamed, yet unrecorded, album will be their powerhouse release. Until then, The Black Sky Sequined will find some admirers while others will long for more.