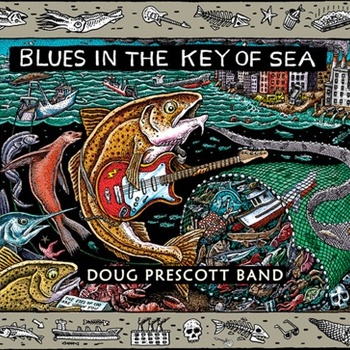 Their third album Blues in the Key of Sea is a refreshing revival of blues music. The album makes nice of acoustic and the electric guitar when appropriate.

Early blues was about blowing off steam and expressing the hardship of life, among other harsh realities of life in the early south, especially for blacks. Modern blues has been integrated with folk harmonies and uplifting tones that will keep listeners engaged. Doug Prescott is not afraid to discuss harsh realities in life, especially in his song Summer of 1968, but he does so with a musical upswing.

The track Don’t Let Our Love Go makes nice use of Caribbean, steel drums. This may seem in stark contrast with blues music, but the Caribbean-style track fits with the overall positive theme of the album.

I enjoy artists that are not afraid to experiment with differing musical art-forms in their music, and this is one band that does so. Newbies to the blues genre will come to like Dough Prescott along with seasoned listeners. The album is accessible, and the theme of the album will make listeners feel good. To learn more about the Doug Prescott Band, visit: https://dougprescottband.bandcamp.com/.