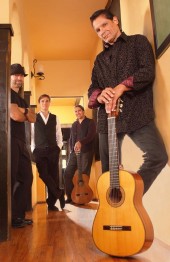 Duendes de Aurora is a Latin/World music group that performs a so called “California Rumba.” With Spanish and American roots and Argentinian folk combined, their sound is as unique as it is flavorful. They perform all over the country and internationally, but they also have a pretty consistent fan base in southern California. Their music is both infectious and well written; their production quality is professional. The band consists of Josh Cruze on vocals and guitar, Dan Sistos with lead guitar, Emiliano Almeida on drums, and Arturo Solar with a blazing trumpet. Josh Cruze sings in both English and Spanish, widening the range of Duendes de Aurora’s audience even further. Duendes de Aurora is a group that should not be missed. If you like Latin or World music, then this is the right group for you.

“Fantasias En Color” is a song with life. It dances. It breathes. The song keeps you moving and it doesn’t stop until the last measure. The guitar is fast paced, and the singing is intense and rapid. The song “Contigo” has a beautiful lead guitar bit at the beginning that leads us in with a trumpet and the drums. Arturo Solar’s trumpet is excellent, and Dan Sistos’s guitar leads us to the verse with a beautiful Spanish guitar bit that nearly brings you to tears. The band has two albums: In The Midnight Hours and The Color of Rhythm.

Other songs by Duendes de Aurora you shan’t miss are “La Vide Tiene Valor,” “Breezes On The Waves,” and Pocho Jarocho.” If you’re interested in learning more about Duendes de Aurora, then hit up their myspace page and get all their music and bios. You won’t be disappointed.