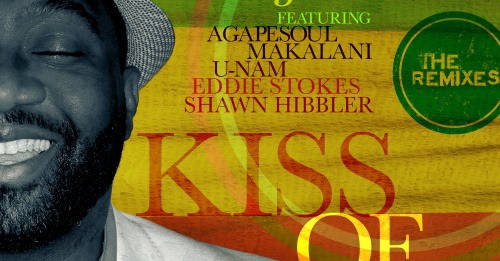 “Kiss of Freedom” feels like a breath of fresh air in a time where Soul music needs more listeners and more songs with feeling – Cleveland P Jones and James Day carry Soul on their backs with their powerful lyricism and imagery.

Brooklyn, New York – May 12th, 2021 – The world has missed classy and invigorating Soul music for quite a while. We can, however, thank James Day and Cleveland P. Jones for taking it upon themselves to bring back the magic of Soul with their refreshing new release “Kiss of Freedom”, which features an all-star band consisting of U-Nam, AgapeSoul, and Makalani Kenyata. Cleveland P. Jones is undoubtedly at the heart of this project – as lead singer, his vocals soar effortlessly and ever so gently and give essence to the song.

That being stated, this is without a doubt a group effort in excellence.

Often dubbed “The King of Collaborators”, James Day grew up wanting to be a songwriter- much like his idols Burt Bacharach & Hal David, Rod Temperton & Quincy Jones. The industry, however, shifted to a direction where it was rare to find singers seeking songs from lyric specialists who were not producers or beatmakers.  With more and more singers writing their own songs, songwriting fell as an art form somewhat in the public eye. James Day, with utmost hard work and dedication, turned his passions into results and became fixated on writing and collaborating with vocalists he admired, vocalists who were open to songs written specifically for them stemming from his inspirations – this allowed him to stand out but stand tall as he got pen and paper to tell his stories.

JD’s Time Machine is the brainchild of the prolific songwriter and producer James Day. JD’s Time machine reminds us of the very powerful and enthralling soulful collectives of the past such as “CHANGE” and “BIONIC BOOGIE” which both often featured the late and great iconic Luther Vandross on lead vocals . “Kiss of Freedom” is currently present  on UAC charts and the Smooth Jazz charts with 4 mixes to choose from. The ‘Urban Mix” is actually now a TOP 40 UAC song and rising. The newest release by JD’s Time Machine, “Kiss of Freedom”, has the multi-talented singer/songwriter Cleveland P. Jones on lead vocals and is a blessing on the ears for music lovers who are into pure Soul.  Since its release, fans around the world are lauding the effortless soulful magic and intricate arrangements which perfectly complement the tight vocals, creating a harmony of musical indulgence. Alternate mixes by Eddie Stokes and Shawn Hibbler are also gaining rapid popularity among fans as people can’t help but admit how moving this  song is and therefore any good mix is more than welcome.

Check out their new release and learn more about JD’s Time Machine on the links below and/or reach out via the contact information for interviews, collaborations, and promotional access.