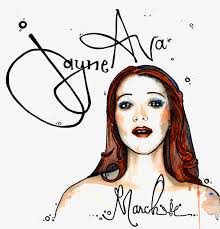 Arguing with fate is pointless. If you know at an early age, like Canadian native Jayne Ava did, that self-expression fulfills you more than all else, you don’t fight it. Jayne Ava embraced her passion for music and performance from an early age and her creative energy has propelled her into the spotlight and widespread acclaim.

This release is a statement. When Ava, over a relentless backbeat, belts out “I use the past to define what I’m going through/Can’t move on without feeling it all“, the listener knows this is a performer holding nothing back. Ava’s passion burns through every minute of “March”, the title track from her debut EP, and the dense electronic backing fills her vocal with additional urgency. This is the burning heart of her music – an intensely musical and theatrical experience with immense pop appeal. It is sometimes easy to dismiss pop music as disposable, but not here. Jayne Ava is defintely read to “March” right now, and she’s going to do just that all over the world, as the track tells about how she plans for world domination and means every word of it. This is a one hundred percent perfect song for anyone with the urge to dance without losing all sight of its message. This creates a combo factor that won’t quit throughout this blazing song. Pop and EDM lovers will be all over this, as she not only gives those in the know such as Britney Spears and Katey Perry a huge run for their money, she somehow makes you fotget about them and such others the world has been moving to in the last two decades. This is a star of an artist with moxy and innocence whirled into one, coming from Canada originally, to the L.A. scene. Sure, all influences are felt, but this is not about re-inventing the wheel, it’s about spinning the existing pop wheels with pure finesse. It has everything the accessible pop dance music is looking for today, no messing around whatsoever. She is on a mission and out to get there, as this single totally explains in her fantastic chorus. It makes you want to “March right now!”

Jayne Ava’s work is an example of modern pop at its best. “March” fully realizes her avowed intent of creating material capable of moving both emotions and bodies and promises spectacular success to come. This is the voice of youthful, energetic creativity capable of leaving an impact on the music world and never less than completely sincere.